"Courts, Judges, and Justice in the International Legal System" 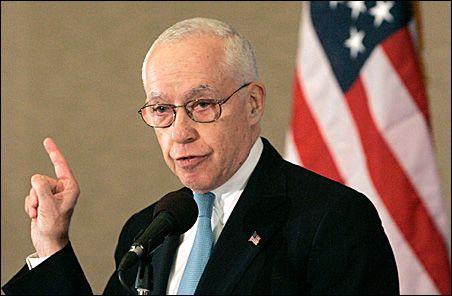 The U.S. is not a participant in the ICC, Mukasey said, citing several objections to aspects of the 1998 treaty that established the court. But he noted a longstanding U.S. commitment to upholding justice and accountability internationally. “The ICC is not a goal in itself, it is a means to achieve a goal,” Mukasey said. “The U.S has done more in its history to further that goal, both by example and by direct action, than any other nation in the world.”

Mukasey (pictured above) noted that U.S. support for the concept of an international criminal court goes back to 1990, when Congress passed legislation urging the government to explore the need for such a judicial body. The U.S. signed the 1998 treaty, but in 2000 President Bill Clinton said he would not send it to the Senate for ratification. And in 2002, the George W. Bush Administration advised the United Nations that it would not become a party to the treaty, effectively reversing the decision to sign it.

The U.S. wanted the court to be under the control of the U.N. Security Council, which Mukasey referred to as “the only body authorized even to consider backing any determination of the court with a credible threat of force.” He noted a provision in the 1998 treaty allowing a prosecutor to proceed independent of a referral or other action by the Security Council. Mukasey also added that the U.S. takes the position that treaties are binding only on parties that ratify them. The ICC, he said, “purports to have jurisdiction over citizens of states that have not ratified the [1998] treaty.”

The U.S. has “a long record of exposing our own messes when they occur,” Mukasey said, citing hundreds of courts-martial against members of the U.S. military for crimes including murder, rape, and other abuses in Afghanistan and Iraq. He also noted U.S. actions after World War I in support of self-determination—the right of people to establish nation-states—and the commitment after World War II to keep Western Europe and most of the world safe.

As Attorney General from Nov. 2007 to Jan. 2009, Mukasey oversaw the U.S. Department of Justice and advised on critical issues of domestic and international law. He joined the New York office of the aw firm Debevoise & Plimpton LLC as a partner in the litigation practice in Feb. 2009, focusing primarily on internal investigations, independent board reviews and corporate governance.

Following the talk, students and faculty members offered a wide range of questions for Mukasey. Event moderator Trevor Morrison ’98, the Isidor and Seville Sulzbacher Professor of Law, began by asking whether there were any possible changes that would make the ICC acceptable to the U.S. The most critical would be control by the U.N. Security Council, Mukasey said, noting that the U.S. and other Security Council members would thus have veto power over what would or wouldn’t go to the ICC. “This would assure, at least, that there was unanimity among significant world powers,” he said.

Asked by Lori Damrosch, the Henry L. Moses Professor of Law and International Organization, whether he sees problems with the court’s procedures that are inconsistent with U.S. constitutional values, Mukasey said: “The principal problem I have is less with the particular details of the procedure than with the substance of the charges that would be brought.” He cited an attempt to bring a case against the British related to activities in the Iraq war, which eventually was dropped. “That’s the kind of thing that would keep me up at night,” Mukasey said.

When a student asked Mukasey whether the U.S. should participate in the ICC for the sake of global public perception, he did not hesitate in answering. “If I, and my children and grandchildren, had three lives to live, I would be willing to use one of them to submit to a social experiment to see what would happen,” Mukasey said. “I don’t, and therefore, the answer is no.”

Hosted by the Columbia Society of International Law, this year’s Friedmann conference was titled “Courts, Judges, and Justice in the International Legal System.”The event included two additional panel discussions: “The International Criminal Court and the Politics of Punishment” and “The Role of the Independent Judiciary in Emerging Democracies.” 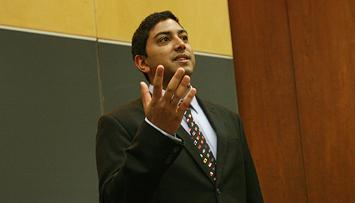 This year’s Friedmann honoree, M. Cherif Bassiouni, Distinguished Professor of Law Emeritus at DePaul University College of Law in Chicago, has been referred to as the “father of international criminal law” and was heavily involved in the creation of the ICC, event co-chair Mithun Kamath ’13 noted. Previous honorees include George Mitchell, the former U.S. special envoy for Middle East peace, and Boutros Boutros-Ghali, the former secretary-general of the United Nations.

The annual event honors the memory of Columbia Law School Professor Wolfgang Friedmann, a refugee from Nazi Germany known for his commitment to the international rule of law and its potential for advancing world peace.