These are just some of the paper topics presented at the 18th annual meeting of the American Law and Economics Association held at Columbia Law School May 16-17.  Law professors, economists, and students gathered to hear recent scholarship from a law and economics perspective that may illuminate important questions many fields, including torts and litigation, labor and employment, corporate governance and securities regulation, health care, and civil rights.

Corporate lawyers spend more time than ever dealing with critical issues of corporate governance, and a hot-button topic is CEO compensation. Papers presented in the May 16 session “Corporate Law and Governance,” chaired by Martijn Cremers from Yale School of Management, examined the impact of increasing shareholder activism on corporations and CEO pay.

Jay Cai, Jacqueline Garner and Ralph Walkling from Drexel University analyzed the latest big trend in corporate governance: majority elections, meaning a requirement that directors be elected by a majority of the outstanding stock, rather than majority of stock represented and not abstaining at the annual meaning. The full impact of majority elections has yet to be seen, Garner said, but they are giving shareholders more power in the election of directors by giving them the power to reject a candidate without maintaining a proxy contest on behalf of a competing candidate. 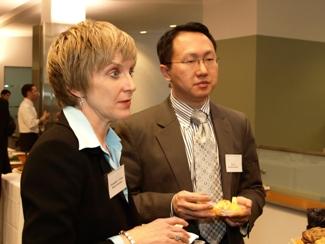 The researchers found that poorly performing firms are more likely to receive majority provision proposals, primarily from union shareholders. Struggling large firms with more outsiders on their boards and fewer shareholder rights are also more likely to adopt them. “We do suspect some firms are adopting them to throw a bone to shareholders,” Walkling said.

Fabrizio Ferri and David Maber from Harvard Business School studied the impact of shareholder votes on executive compensation by examining the impact of “say on pay” regulation introduced in the United Kingdom in 2002. They found that there’s been an increase in the sensitivity of CEO cash and total pay to poor operating performance as a result. The trend is seen most clearly in firms with “excessive pay” before the regulation was introduced, Ferri said.

Similar regulation has been adopted in Australia, the Netherlands, Norway and Sweden, and it’s a hot topic in the United States, Ferri said. But he hesitated to say the same effect would be seen in other countries. “But this is a way to start a dialogue,” he said.

Are high-end CEO pay packages gouging the shareholders or a reward for talent? Highly paid CEOs can be valuable to shareholders, said Antonio Falato from the Federal Reserve Board in his presentation, “Superstars or Super Lemons?” He studied CEO salaries and the outcome of their acquisitions and concluded that highly paid executives make much more profitable acquisitions. Weaker managers – who would be paid less if markets work -- can be very costly to shareholders, Falato said.

“My analysis provides direct evidence that CEO talent is extremely valuable and, as such, rewarded accordingly,” Falato said. 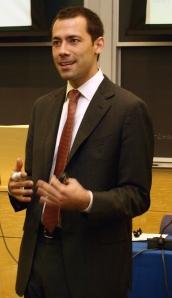 Antitrust policy and regulation were examined in a May 17 panel. Professor Scott Hemphill (right) from Columbia Law School looked at drug patent settlements between rivals and found that competition among drug makers challenges the institutional structure of antitrust policy. The basic problem, Hemphill said, is that side deals involving payments between drug makers are forcing consumers to pay monopoly prices for a longer period of time.

“Although this has become a major issue today, back in the 90s, nobody paid any attention to this at all,” Hemphill said.

Courts today are not dealing effectively with the problem, he added. For the most part, they have denied antitrust liability in such cases. Courts take an extreme view of a patent’s exclusionary scope and don’t understand that a patent does not provide so much insulation from competition, he said. They also face difficulty identifying case-specific facts.

Solving the problem will require an industry-wide approach, Hemphill said. That would help identify and overcome a single court’s inability to see the value of a side deal or the strength of a patent.

All-unit discounts (or retroactive rebates) are another recent issue in antitrust law, said Ansgar Wohlschlegel and Eberhard Feess from Germany’s Aachen University. The European Commission prohibits practices that could be used to abuse market dominance, and such discounts are among the allegedly exclusionary practices.

Another panel that day chaired by Richard Brooks from Yale Law School (who visited at Columbia last year) addressed civil rights and the problem of discrimination in the corporate world.

Justin Wolfers from Wharton and Alok Kumar from the McCombs School of Business (UT Austin) presented preliminary findings on their study of whether analysts similarly treat male and female CEOs at S&P 1500 companies. They found that gender discrimination is alive and well among analysts.

“These are mistakes and no one wants to make them, and you can change it,” Wolfers said. “That’s what we’re really after here.”

Female CEOs, who typically head smaller firms than men do, often outperform male analysts’ predictions, he said. On the other hand, female analysts are more likely to underestimate male CEOs, but they make up about 30 percent of analysts.

And the market doesn’t undo this bias. The announced appointment of a female CEO makes a company’s stock price fall slightly, Wolfers said. “If you believe your stock price is set by analysts, you don’t want a female CEO,” he said.

Amy Miller is a writer for American Lawyer.