New York, December 4, 2015—Columbia Law School’s Sabin Center for Climate Change Law is presenting work at the United Nations Conference on Climate Change in Paris, including in-depth research on the human rights implications of global warming and  a comprehensive assessment of critical issues for designing a facility to accommodate mass migration caused by climate change.

Negotiations leading up to the Paris conference have included a call for a “displacement coordination facility,” but details have been lacking. “The prospect has gained some momentum” in the wake of the migrant crisis in the Middle East and Europe, though “there has been very little public discussion about what this facility would entail and how it would operate,” noted Sabin Center Climate Law Fellow Jessica Wentz ’12, who wrote the briefing note with Sabin Center Executive Director and Law School Lecturer Michael Burger ’03. Their report tackles such outstanding issues as funding, humanitarian assistance, and technical and logistical support.
Launched at Columbia Law School in 2009, the Sabin Center for Climate Change Law is helping to shape and deploy key legal tools in the fight against global warming as well as to train the next generation of leaders in climate change law. In a pre-Paris interview with the Columbia Daily Spectator, Sabin Center Director Michael Gerrard, the Andrew Sabin Professor of Professional Practice, spoke about the pro bono work Law School faculty and students have performed for developing nations with the Legal Response Initiative (LRI). “The Sabin Center has become the North American hub,” he said.
But Gerrard expressed low expectations for the Paris conference in a Nov. 23 post on The Earth Institute’s State of the Planet blog, writing the commitments that countries are putting on the table “do not add up to nearly enough” to meet the goal of keeping the world’s temperature from rising 2 degrees Celsius. He also said these commitments will not be legally binding, and “no one can sue” to enforce them. “Instead the plan is to come back every five years and hopefully do better,” wrote Gerrard, the faculty chair at the Earth Institute. A hopeful sign has come from China, which has pledged to lower greenhouse gas emissions, “though not until 2030.” 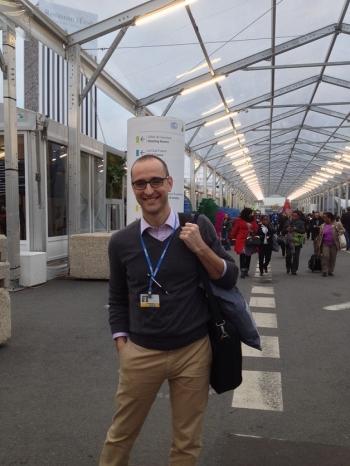 Justin Gundlach (left), one of the center’s Climate Law Fellows, is serving as the North American liaison for LRI in Paris, fielding questions from least developed nations and seeking assistance from pro bono attorneys back here in the US. Gerrard will be there the week of December 7 and is scheduled to speak at five different side events over the course of the week.
Columbia University is sending more than two dozen graduate students and faculty to the Paris summit. The Law School’s Sabin Center for Climate Change Law will be posting updates on its Climate Law Blog. Though Gerrard told the Spectator he expects some kind of agreement to come out of the Paris talks, he stressed the urgency of long-term planning: “One of the devilishly difficult problems is that things that you do—even if they’re very expensive—won’t yield tangible results on the climate for decades to come.”