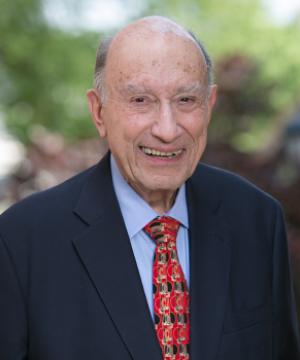 A born-and-bred New Yorker, Sovern was recognized for his decades-long dedication to Columbia University, for his philanthropy, and for his service on numerous city commissions and boards. The Conservancy is a nonprofit organization dedicated to preserving, revitalizing, and reusing New York’s architecturally significant buildings.

Other leaders honored at celebration at The Plaza Hotel included:

A true Columbian, Sovern graduated first in his class from the Law School in 1955. Two years later, he joined the Law School faculty, becoming a full professor in 1960. At just 28, and fewer than 10 years after graduating from Columbia College, he became the youngest tenured professor in the modern history of Columbia University.

Sovern became dean of the law school in 1970, Columbia University provost in 1979, and the University’s 17th president in 1980, serving in the latter role for 13 years. He chronicled his career and life in an autobiography, An Improbable Life: My Sixty Years at Columbia and Other Adventures, published in 2014 by Columbia University Press.

Sovern, who remains a member of the Law School faculty as the Chancellor Kent Professor of Law and President Emeritus, has also served in a variety of high-profile legal, business, administrative, and philanthropic roles. He is currently president of The Shubert Foundation, and was a member of the boards of the Pulitzer Prize and the NAACP Legal Defense Fund.

Sovern is a former arbitrator for disputes between numerous private companies and public agencies and the unions representing their employees.