New York, April 19, 2011—Columbia Law School alumna Roberta “Robbie” Kaplan ’91 (below, right), a litigation partner at Paul Weiss, was honored by the Columbia Law Women’s Association (CLWA) this year for her work that has paved the way for future generations of female lawyers. 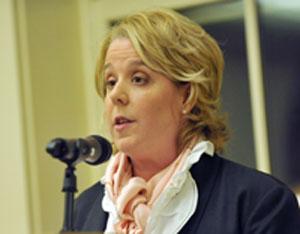 Family, friends, colleagues, students, and guests gathered on April 6 at Faculty House to celebrate Kaplan’s achievements and advancement of women in law.

CLWA’s annual dinner is named after Myra Bradwell, a political activist and lawyer who, in 1869, was denied admission to the Illinois Bar because as a married woman, she was prohibited from entering into legally binding contracts. In 1873, she appealed her case to the Supreme Court, and after many hurdles was finally admitted to the bar in 1890. 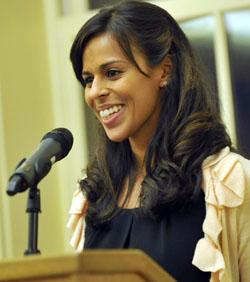 Priya Merrill (left), Myra Bradwell Chair of CLWA, said Kaplan exemplified Bradwell’s pioneering spirit and fight for women’s rights. “As a female lawyer who balances work at a top-ranked law firm, a robust pro bono practice, and a family, [Kaplan] is a role model for young women in the legal field,” Merrill said.

On a pro bono basis, Kaplan has taken on many cases involving the constitutional rights of same-sex couples and their families. She currently represents Edith Windsor, the plaintiff whose case persuaded the President and the Department of Justice to cease defending the constitutionality of the so-called Defense of Marriage Act (DOMA). While Chair of Paul, Weiss’s Women's Initiatives Committee, she instituted comprehensive changes to the firm's flex-time, mentoring and day care policies.

“I’m delighted to be here to honor Robbie as she takes her place among the women of Columbia Law School,” said Michele Hirshman, a colleague and partner in the Litigation Department of Paul, Weiss.

As a young lawyer, Kaplan clerked for Judge Judith S. Kaye (below, right), retired Chief Judge of the State of New York and currently of counsel at Skadden, Arps. She eventually became Kaye’s senior law clerk, working on speeches and articles, drafting opinions, and traveling with her on many long car rides to and from Albany. 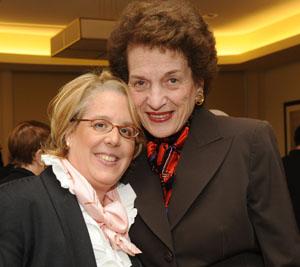 “What a joy it has been to watch your success,” Kaye said to Kaplan, who she described affectionately as a longtime friend. “I feel like a very proud parent. Myra Bradwell is proud too.” Kaplan, in turn, later described Judge Kaye as her mentor and role model.

In her speech, Kaplan discussed the different questions asked by the male and female justices on the United States Supreme Court at the recent oral argument in the Wal-Mart gender discrimination case, a class action lawsuit which alleges the retailer favors male employees over female employees in terms of wages and promotions.

Kaplan thanked her friends and family, particularly her parents (below) for encouraging her to pursue justice. A proud Richard Kaplan, Robbie’s father, joked that “Robbie has my wife’s brains and my work ethic.”

Another part of the event was the Columbia Journal of Law and Gender’s presentation of the Myra Bradwell Note to this year’s winner, Kate Moore ’12 for her article entitled "Pregnancy in Foster Care: State Agency Policies and Judicial Response Surrounding Pre-Natal Care, Abortion and the Consequences for Foster Families," which examines the lack of state and federal statutes for young women who become pregnant in foster care.

Of the evening, Kaplan said, “To be honest, like any young lawyer fresh out of law school, I had no idea what was in store for me two decades ago. I hope that I was able to impart at least a few small words of wisdom to the law students who were there.”