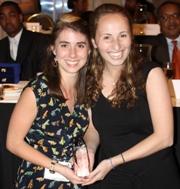 New York, March 25, 2009 — Columbia Law School students Kinara Flagg ’11 (far left) and Maren Messing ’11 (left) placed second at the national Frederick Douglass Moot Court competition. The two first-year students edged out second- and third-year law students from schools across the country over six rounds of oral arguments, held in Irvine, California, from March 19 to 21.
Ninety-eight teams – two students per team – submitted briefs at the beginning of the competition. Sixteen teams, winnowed down through six regional moots, made it to the national event in Irvine.
Messing and Flagg qualified for the national competition from their strong performance at the regional competition in Springfield, Massachusetts, last month. Columbians Tara Panattoni ’11 and William King ’11 also advanced to nationals, where they participated in three rounds of arguments.

At issue was the fictitious case of a plaintiff who alleged retaliation for reporting harassment on the basis of her sex, race, and national origin, in violation of Title VII of the Civil Rights Act of 1964. The plaintiff also sought damages under 42 U.S.C. § 1981.
“We’ve sat with this problem for a long time – it’s been percolating in our heads since October,” said Flagg, who chose the Frederick Douglass competition for its focus on civil rights and the promise of extensive argument practice.
Frederick Douglass is one of seven intermural moot courts Columbia Law School students are competing in this year. The programs give students the opportunity to delve deeply into a legal problem, sharpen their brief-craft and oral argument skills, and form bonds with their teammates.
Students also find mentors in their coaches, second- and third-year students who have participated in past moot courts. This year’s Frederick Douglass coaches are veteran competitors Joshua Bird ’10 and Katie Poynter ’10. 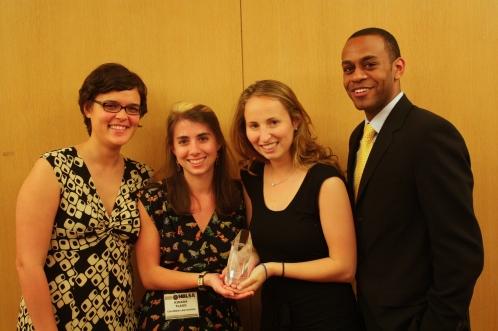