Columbia remained undefeated through the quarter-final, semi-final, and final rounds of competition. Erin Thompson ’10 won best oralist for the final round, while Suyash Paliwal ’10 took best oralist, and Jennifer Poh ’10 took seventh best oralist in the preliminary rounds. Erik Lindemann ’11 and Elisabeth Page ’11, though not eligible for speaker awards, won the rounds in which they participated.

This year marks the 50th annual Jessup competition, the world’s largest moot court competition with participants from more than 500 law schools in more than 80 countries. Competitors argue a simulated fictional dispute between countries before the International Court of Justice. The competition is named after Professor Philip Jessup, who taught international law and diplomacy at Columbia from 1925 until 1961, when he began a nine-year term as United States representative to the International Court of Justice. 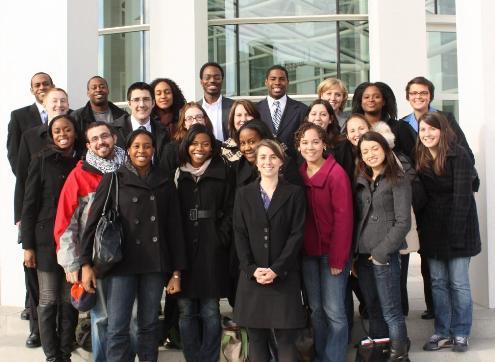 Flagg, Messing, Vermazen and Ibarra will advance to the national round held in Irvine, California, March 18 to 22, along with their coaches, veteran competitors Joshua Bird ’10 and Katie Poynter ’10.

The Frederick Douglass Moot Court competition, held annually since 1975 by the National Black Law Students Association, focuses primarily on public law and topics of particular relevance to students of color.

European Law Moot Court
Columbia placed second at the European Law Moot Court (ELMC) regional competition in Sofia, Bulgaria, held February 19 to 21. Columbia was the only non-European team of the 12 competing. The judges told competitor Jindrich Kloub LL.M. ’09 that he received the single highest score of the competition for his oral pleading in the final round. Also competing were Diana Marmur, Franck Chintoya, and Christodoulos Kaoutzanis, all Class of 2011.

Jantira Supawong ’10, a veteran competitor in the ELMC, coached the team, and Professor George Bermann served as advisor.

The ELMC Competition, founded in 1988, addresses a problem of European law set under the auspices of the European Law Moot Court Society. Teams from law schools around the country can submit written pleadings; the best 48 are selected to participate in regional competitions.

A second Columbia team will head to the regional competition in Bangor, Wales, from March 26 to 28. The winner of that event will advance to finals before the Court of Justice of the European Communities in Luxembourg.

National Environmental Law Moot Court
First-year students Caroline Fleetwood, Nick Houpt, and Anne Lieberman represented Columbia at the National Environmental Law Moot Court, the only known group of 1Ls among over 70 upperclassmen teams from around the country. Fleetwood earned best oralist during the qualifying round of the competition. Second-year students -- and veteran competitors -- Travis Annatoyn, Stephen Hayes, and Adrienne Maxwell coached the team.

Every year since 1989, more than 200 student advocates from across the United States and Canada have participated in the National Environmental Law Moot Court Competition hosted by Pace Law School. This year's competition took place from February 19 to 21.