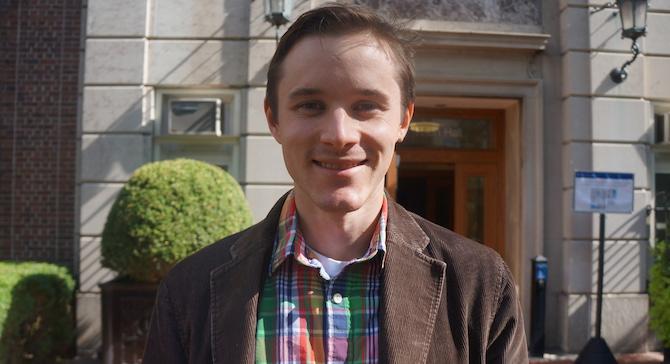 Columbia Law School student Channing Jones ’17 recently claimed first place in the New York State Bar Association’s annual environmental law writing competition, with second place being awarded to Esmeralda Colombo ’16 LL.M.
His paper, “Energy Efficiency as Best Available Control Technology: Practices and Possibilities,” was chosen as winner of the 2016 New York State Bar Association Environmental Law Section’s Professor William R. Ginsberg Memorial Essay Contest. The competition is open to all J.D. and LL.M. students from across New York state, and judging criteria include organization, practicality, originality, quality of research, and clarity of style.
Jones’ essay examines how the Prevention of Significant Deterioration (PSD) provisions of the Clean Air Act—which apply to most greenhouse gas emissions in the United States— might be deployed as an energy efficient means to control these emissions, and what impacts, if any, Best Available Control Technology (BACT) protocols have on air pollution.
“It’s a big honor to be selected as winner of this essay contest, and it definitely encourages me to continue researching and writing about environmental law,” said Jones, a native of the Seattle suburbs, who considered himself an environmentalist from a young age.
Jones wrote the winning paper while he was a student in Professor Michael B. Gerrard’s Advanced Climate Change Law seminar, which examines cutting-edge U.S. and international issues in the regulation of climate change. Last year’s award went to another student of Gerrard’s, Gregg Badichek ’16, for his essay, “Resolving Conflicts Between Endangered Species Conservation & Renewable Energy Siting: Wiggle Room for Renewables?”
“It's quite gratifying that two years in a row, our students won first prize in this important and competitive contest. It's a sign of the strength of our environmental program and the quality of the students who come here,” said Gerrard, director of the Law School’s Sabin Center for Climate Change. “Tackling the world’s serious legal problems will require a great deal of serious legal analysis, and Channing and Gregg are already contributing.” [Badichek currently serves as a judicial law clerk with the U.S. Court of International Trade.]
Jones credits Gerrard with encouraging him to examine greenhouse gas regulation for this essay, and for providing guidance on coursework, research, and career. “Professor Gerrard is an invaluable resource for students interested in environmental law at Columbia and in the New York community,” Jones said, noting the professor also advised him on his Columbia Journal of Environmental Law note titled “Intersection of the Natural Gas Act with State Environmental Regulation.”
Colombo, a lawyer from Italy, took second place in the competition for her essay titled “Enforcing International Law in U.S. Courts: The Law of the Sea Convention at Play in Kivalina.” Her piece focused on potential avenues of legal recourse for members of an Iñupiat community in Alaska affected by water pollution from a nearby zinc mine.
Now a research fellow at the University of Bergen in Norway, Colombo intends to use her case study on Kivalina as part of her dissertation and as the mold for prospective case studies on instances of environmental pollution unfolding in Europe.
The annual competition is named for the late environmental law pioneer William R. Ginsberg, and is meant to challenge law students to analyze the environmental issues confronting the world today. The 2016 awards will be presented during the New York State Bar Associations’ fall meeting, Oct. 14–16, in Cooperstown, New York.
###
Posted October 11, 2016