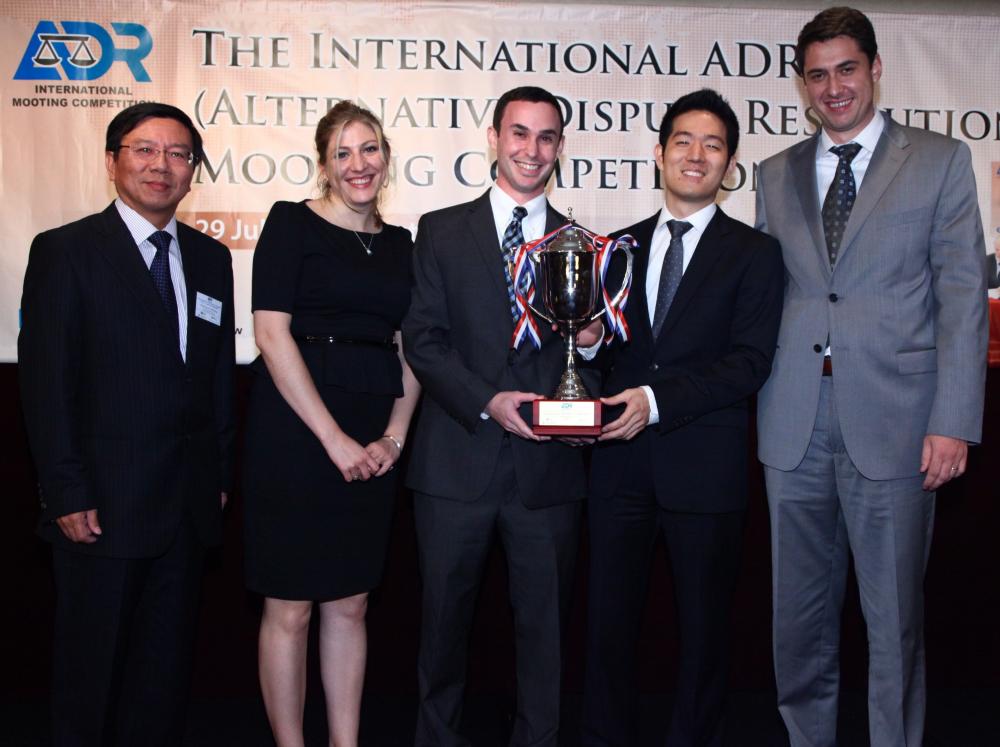 Competing team members were oralists Justin Epner ’14 and Philip Lee ’13, and mediator Corinne Champilou ’15. The team was coached by Parvan P. Parvanov J.D. ’11, LL.M.' 09, who as a student was mentored by two towering figures of international arbitration— Columbia Law School’s George Bermann, the Jean Monnet Professor of EU Law and the Walter Gellhorn Professor of Law, and the late Professor Hans Smit, whose unparalleled contributions to the field of arbitration are a lasting legacy at the Law School.

The competition, hosted by City University in Hong Kong, is the first such contest to combine both non-adversarial facilitative mediation and adversarial international arbitration, giving participants an arena to employ real-world professional skills. In its third year, the event attracted twice the number of teams that competed in 2010, drawing participants from the U.S., China, Hong Kong, Australia, Malaysia, Japan, India, Austria, India, Slovakia, the Czech Republic—and even Nepal.

“The great teamwork and all-round performance in both portions of the competition secured Columbia’s victory,” said Parvanov, who as a Law School student won a prestigious writing prize awarded by the North American branch of the Chartered Institute of Arbitrators.
The competition was held from July 29 through Aug. 4, and allowed participants to play multiple roles—client and attorney, as well as claimant and respondent. One member of each team served as mediator/arbitrator throughout the competition. Each two-hour round began with an arbitration that was overseen by the student arbitrator and two event judges. After both sides presented their case in arbitration, the process shifted to mediation—a more facilitative and less adversarial process. During the mediation, the student arbitrator reversed roles and became the sole mediator.
Professor Bruno Zeller, a world-renowned scholar in international commercial law with Victoria University in Melbourne, authored the problem examined in the competition. The fact-pattern raised numerous issues from different topical areas, including private international law, international commercial arbitration, and international contracts for the sale of goods.
The Law School’s Epner and Lee argued six times before they advanced to the final, where they faced off against a team from Murdoch University of Australia, a previous winner of the competition. According to Parvanov, a combination of “meticulous research, thorough preparation, and an effective rebuttal strategy” led to the ultimate victory for the Law School.
“Our preparation set us apart,” said Epner, who worked this summer in the Consumer Frauds and Protection bureau of the New York State office of the Attorney General. “We had studied our opponents’ brief so thoroughly we often knew what they were going to say even before they did.”
“It was a wonderful experience that taught us the importance of execution and delivery,” said Lee, who recently completed a summer internship with a financial services firm in New York City. “The key to winning a moot court competition is not just preparation—we also learned to interact effectively with the judges, which helped us win.”
Besides winning the overall competition, the Law School shared the honor of the “best team in mediation” award with Pan-European University from Slovakia.
The competition is a joint effort among the China International Economic and Trade Arbitration Commission, the School of Law at City University, and Columbia Law School. Columbia has for years offered one of the most comprehensive ADR programs in the nation. Earlier this year, the Law School established the Center for International Commercial and Investment Arbitration Law to further the teaching and study of international arbitration, building on the school’s well-established expertise in this rapidly growing legal practice.