New York, March 26, 2015—Columbia Law School Professor Kimberlé Crenshaw was honored in March by two groups for her contributions to law and policy and to higher education.

Harvard Law School, where Crenshaw earned her J.D. in 1984, recognized Crenshaw as one of its “Women Inspiring Change” during its 2nd Annual Harvard Law International Women’s Day. Other honorees include Anne-Marie Slaughter, president and chief executive officer of New America; and Urvashi Vaid, director of the Engaging Tradition Project at Columbia Law School’s Center for Gender and Sexuality Law. 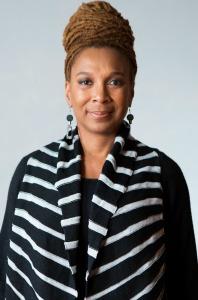 Crenshaw also was recognized by Diverse: Issues in Higher Education, a newsmagazine focused on matters of access and opportunity for all, as an outstanding woman leader in the publication’s fourth annual special report on the contributions of women to higher education. The report was created in honor of Women’s History Month, which takes place in March.
Crenshaw is director of the Center for Intersectionality and Social Policy Studies (CISPS) at Columbia Law School, which she founded in 2011. She is also co-founder of the African American Policy Forum (AAPF).
Crenshaw's work has appeared in the Harvard Law Review, the National Black Law Journal, the Stanford Law Review, and the Southern California Law Review. She has lectured nationally and internationally on race matters, addressing audiences throughout Europe, Africa, and South America, and facilitated workshops for civil rights activists in Brazil and in India, and for constitutional court judges in South Africa.
Crenshaw's work on race and gender was influential in the drafting of the equality clause in the South African Constitution. In 2001, she authored the background paper on Race and Gender Discrimination for the United Nations' World Conference on Racism and helped facilitate the inclusion of gender in the WCAR Conference Declaration.
In February, Crenshaw co-authored a report, Black Girls Matter: Pushed Out, Overpoliced and Underprotected, showing that girls of color face much harsher school discipline than their white peers but are excluded from current efforts to address the school-to-prison pipeline.
From March 30 to April 3, CISPS and AAPF are sponsoring #HerDreamDeferred, a weeklong online event series designed to explore the status of Black women in the U.S. Each day will feature an online discussion targeting a set of challenges faced by Black women.  The topics will include: state-sanctioned violence, economic inequality, domestic violence and sexual assault, school-pushout, health disparities, and barriers facing Black women and girls in higher education.
The goal of #HerDreamDeferred is to elevate these and other unique challenges facing Black women and girls so that stakeholders across the country can better understand and address them. Information is key to broadening the public will to develop an inclusive social justice agenda that leaves no one behind.