Kate Morris plans to spend the year at the Southern Center for Human Rights. 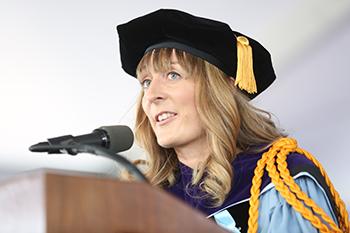 To some, death penalty litigation might seem a depressing pursuit, fighting long odds for clients in grim circumstances. Not to Kate Morris ’13 LL.M., ’16 J.D., a Columbia Law School graduate just awarded the 2017 Herbert and Nell Singer Social Justice Fellowship. “There are few things as motivating as fighting a death sentence,” she says.

As a Singer Fellow, Morris will spend the next year as a staff attorney at the Southern Center for Human Rights (SCHR), which defends clients who are on death row or serving excessive sentences for nonviolent drug offenses. “Kate’s experiences during and prior to law school [will] enable her to hit the ground running [at SCHR],” the organization’s Managing Attorney Patrick Mulvaney said. “It would be difficult to imagine a new attorney better prepared to join the SCHR team.”

Morris’ passion for indigent and capital defense litigation dates back to two fellowships she had years earlier with Reprieve, a U.K.-based organization that represents people facing execution around the world.

Working out of New Orleans, Morris says one case in particular stuck with her: A British man was discharged from the Army for mental illness, yet was hired by a private security contractor and sent to Iraq. Within 36 hours of arrival in Baghdad, he had shot two coworkers and an Iraqi security guard, and he faced the death penalty in Iraq.

Morris, along with a Reprieve staff attorney, gathered records and interviewed the client’s family, friends, and former teachers and employers in order to inform a psychological evaluation for the defense. The man was sentenced to life in prison, instead of death.

Educated in the U.K.—she earned a B.A. from the University of Oxford and a graduate diploma in law from BPP Law School—Morris says her experience in the U.S. affected her in a “visceral” way. She earned an LL.M. from the Law School in 2013. Then, witnessing what she called “the racial inequality underlying the criminal justice system” while working on these issues, she was inspired to return to Columbia for a J.D., which she earned in 2016.

Ultimately, Morris wants to practice criminal defense and civil rights litigation in the South, where she spent her early childhood. She describes the Singer Fellowship as “a vital entry point” to that future.

“Kate exemplifies the ideals of social justice that we cultivate at Columbia Law School, and she has already proven herself to be a fierce advocate for human rights,” said Gillian Lester, Dean and the Lucy G. Moses Professor of Law. “As a Singer Fellow, Kate is well prepared to serve clients at the Southern Center for Human Rights with the utmost sensitivity, professionalism, and tenacity. I wish her all the best.”

Now a law clerk for the Eastern District of Pennsylvania, Morris interned with the NAACP Legal Defense and Educational Fund, the Center for Constitutional Rights, and U.N. Women while at Columbia. She was a James Kent Scholar at the Law School, earned faculty praise as editor-in-chief of A Jailhouse Lawyer's Manual, and received both the Jeffrey Williams Memorial Prize for Critical Rights Analysis and the Parker School Recognition of Achievement in International Law. At graduation last year, Morris was selected to present the 2016 Willis L.M. Reese Prize for Excellence in Teaching to Professor Olati Johnson. Following her Singer Fellowship, Morris will clerk for 9th Circuit of Court of Appeals Judge Raymond Fisher.

The Herbert and Nell Singer Social Justice Fellowship, now in its third year, honors Herbert Singer ’28 and his commitment to providing support to meaningful learning experiences in public interest law. Christopher D. Wilds ’15 and Kevin Opoku-Gyamfi ’16 are past recipients.