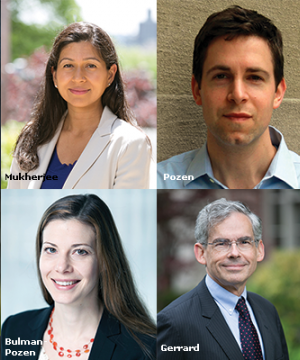 Columbia Law School's faculty roster includes leading experts in many of the most pressing issues facing the country today, such as climate change, immigration, policing, and women's rights. In both preparing for the 2016 presidential election and now, looking toward the establishment of the Trump administration, these experts offered their insights to myriad media outlets around the world. Read on to see what our professors have to say about the election, and the road ahead.

Bloomberg BNA—November 1
Courts Cautious, Not Paralyzed, With Election Imminent
Avoiding actions close to an election to avoid influencing an election’s outcome is an informal judicial policy, Richard Briffault, who teaches law and politics at Columbia Law School, New York, told Bloomberg BNA Nov. 1. It’s similar to the FBI policy that has received so much attention in the wake of the re-opening of the investigation into presidential candidate Hillary Clinton’s private e-mail server, he said.

The New York Times—November 2
Trump Probably Avoided His Medicare Taxes, Too
By Fred T. Goldberg Jr. and Michael J. Graetz
By declaring such a low salary, Mr. Trump, we believe, avoided paying millions of dollars of Medicare taxes that should have gone to support senior citizens and their families. He may even have shortchanged Social Security by declaring salary and self-employment income below the limit on Social Security taxes ($118,500 in 2015).

CBC Radio—November 6
Will American politics survive Trump?
The votes will be counted Tuesday night, but we still have no idea if by Wednesday morning, we'll have a clear winner, let alone an uncontested winner. And we have no idea when — or if — things will return to some kind of normal in the American polity. Our panelists are: Patricia Williams, David Frum, Moustafa Bayoumi.

The Huffington Post—November 7
If You Were Born After 1969, You Have No Idea What A Liberal Supreme Court Is
“The Warren court had made the promotion of equality its central mission―voting equality, school equality, equality for criminal defendants,” said Columbia law professor Michael Graetz, co-author with Linda Greenhouse of The Burger Court and the Rise of the Judicial Right, released in June. “In the Burger court, equality was no longer terribly important.

Marketplace—November 7
How last-minute campaign donations might be spent
Richard Briffault, an expert in campaign law at Columbia Law School, said raising money may be the least important part of asking, at this stage of the campaign. “There’s some evidence that it just continues to energize people—people can participate by voting, by wearing buttons, by making phone calls and giving money.”

Climate Central—November 9
Trump’s Presidency Poses Serious Risks to the Climate
“It is quite possible that a Trump administration will spell devastation for environmental and climate regulation in the U.S., and to the public health and well-being of people, ecosystems and biodiversity around the world,” said Michael Burger, the executive director of the Sabin Center for Climate Change Law. “It is also possible that it won't. Let's hope that the responsibility of the office takes hold, and his obligations to current and future generations register once he has power.”

Climate Central—November 10
States May Drive U.S. Climate Policy Under Trump
Michael Burger, executive director of the Sabin Center for Climate Change Law at Columbia University, said that a Trump administration could be devastating for climate regulation in the U.S., but there are limits to what Trump will likely do right away…“President Obama has been challenged in court at every turn as he tried to reduce greenhouse gases,” Burger said.

Climate Central—November 11
Climate Lawsuit Awaits President Trump
“The prospect of a Supreme Court with one or more Trump appointees does not instill confidence,” said Michael Gerrard, a professor at Columbia Law School. “But this kind of litigation is all the more important in the Trump era.”

Audubon—November 11
Historic Climate Case Led By Kids Is Headed to Trial
The problem, according to Michael Burger, the executive director of Columbia Law School’s Sabin Center for Climate Change Law, is that no U.S. federal court has ever accepted that there’s a constitutional right to a stable climate, or that the public trust doctrine even applies to federal governments. In other words, “the plaintiffs here are asking the court to accept legal theories that haven’t been accepted before,” Burger says.

NJ.com—November 13
Where will Trump do worst damage? My vote is climate
"It's sad," says Michael Gerrard, faculty director of Columbia University's Sabin Center for Climate Change Law. "I've been looking for some ray of hope. But this is a catastrophe."

Inside Climate News—November 14
Could Donald Trump Kill the EPA? Probably Not, but He Could Cripple It
"Trump sounds like he's serious about scaling back much environmental regulation," said Michael Gerrard, director of the Sabin Center for Climate Change at the Columbia Law School… "You can't eliminate the agency," Gerrard said. "But you can starve and cripple it."

Balkanization—November 16
The Constitutional Trump Card That Wasn’t Played
By David Pozen
Donald Trump is not yet the President-elect. Under our constitutional framework, the Electoral College will select the President next month. Electors customarily vote the way their state voted. But many states don’t require that they do so.  As pundits have started to point out, a few dozen “faithless” electors could—lawfully—send Hillary Clinton to the Oval Office.

Marketplace—November 10
Financial Reform in the Crosshairs
But there are also people worried about negative effects of dismantling Dodd-Frank. Robert Jackson, Jr., helped write the law as an attorney at the Treasury Department. He now teaches law at Columbia University. He said without strong regulations to govern failing mega-banks, the next administration could face another financial crisis. "What I'm hoping," Jackson said, "is that they don't go so far that they find themselves in a situation where we're on the brink of economic catastrophe and the only choice is to bail out the banks.”

Fox Business—November 15
Trump Administration Looks to Neuter NYS ‘Martin Act’
“Preemption is possible but it may attract a filibuster” by Democrats in Congress, delaying its passage and creating negative publicity around the issue, said Columbia law school professor John Coffee. “And also many Republicans believe in state regulation.”

WUNC—November 15
How 'Broken Windows' Helped Shape Tensions Between Police And Communities
Bernard Harcourt is a law professor at Columbia University. He says crime dropped not just in New York, but nationwide, in cities where nothing like broken windows policing was in place.

Voice of San Diego—November 11
Sacramento Report: The Insulated State of California
Jessica Bulman-Pozen, a professor at Columbia Law School who studies the interaction of states and the federal government, said there are plenty of things California could do to protect the environment, enhance financial regulations and provide expansive access to health insurance—even if the Trump administration rolls back the Obama administration laws that do so now. But Bulman-Pozen cautioned that a Trump administration could also pass laws that preempt the state from taking certain measures to insulate itself, since federal law literally trumps state law.

Market Watch—November 12
How Donald Trump’s win could affect your wallet
Trump’s most recent plan proposes cutting taxes by $6.2 trillion over 10 years, according to Tax Policy Center estimates. Those cuts would apply broadly to a variety of households, said Michael Graetz, a professor of tax law at Columbia University Law School.

Popsugar—November 9
Are Abortion and Other Reproductive Rights in Jeopardy Under President Trump?
Carol Sanger, author of About Abortion: Terminating Pregnancy in the Twenty-First Century and professor at Columbia Law School, said the choice of Pence should worry pro-choice Americans. She notes: "Pence said during the campaign, ‘Go tell your neighbors and your friends [that] for the sake of sanctity of life . . . and all of all our other God-given liberties, we must ensure the next president appointing justices to the Supreme Court is Donald Trump."

The Globe and Mail—November 11
‘It will be devastating’: Women’s rights at risk under Trump presidency
“It feels likes a death,” Prof. [Carol] Sanger says of the election result. She quotes the observation of one of her students: “‘We think we are just walking down the street, and everything is the way it was, but it’s not.’”…“It will be a very dark period,” predicts Katherine Franke, the director of the Centre for Gender and Sexuality Law at Columbia.