H.F. (Gerry) Lenfest '58 Donates the Philadelphia Inquirer, Philadelphia Daily News, and philly.com to New Nonprofit Journalism Institute; Dean Emeritus David M. Schizer Will Serve On the Board
New York, January 12, 2016—H.F. (Gerry) Lenfest ’58, chairman and sole owner of the the Philadelphia Inquirer, Philadelphia Daily News, and philly.com, is making news this week in an innovative bid to promote the future of quality journalism in Philadelphia.
In what The Washington Post described as a “groundbreaking deal,” Lenfest will donate the parent company of these news organizations, Philadelphia Media Network (PMN), to a newly created nonprofit organization called the Institute for Journalism in New Media. Lenfest also is contributing $20 million to establish an endowment for the institute.
“My goal is to ensure that the journalism traditionally provided by the printed newspapers is given a new life and prolonged, while new media formats for its distribution are being developed,” said Lenfest, during a press conference held on January 12 at the National Constitution Center in Philadelphia.
Among the institute’s initial board of managers—handpicked by Lenfest—is Columbia Law School Dean Emeritus David M. Schizer, the Harvey R. Miller Professor of Law and Economics, and Steve Coll, the two-time Pulitzer Prize-winning journalist who currently serves as dean of the Columbia University Graduate School of Journalism. Schizer already serves on PMN’s board, and will continue in that capacity as well. In a 2011 article in the Journal of Legal Analysis, Schizer advocated for more news organizations to become nonprofits in order to benefit more readily from philanthropic support. He worked closely with Lenfest on the creation of the new institute.
After graduating from Columbia Law School in 1958, Lenfest began his career at the New York law firm of Davis Polk & Wardwell. In 1965, he was recruited by Philadelphia Inquirer publisher Walter Annenberg to become corporate counsel of Triangle Publications. When Annenberg decided to sell his cable television holdings, Lenfest bought them and launched Lenfest Communications, which he built into the Philadelphia region’s largest cable operator, with 1.2 million subscribers. In 2000, he sold the cable television operations to Comcast Corporation.
Today Lenfest, 85, is one of the nation’s leading philanthropists. In 2008, when Columbia Law School awarded Lenfest its highest honor, the Medal for Excellence, Schizer praised Lenfest for his “profound integrity” and “real passion for improving the world.” The Lenfest Foundation, he noted, had funded the construction of Lenfest Hall, which opened in 2003, and had endowed 10 new professors’ chairs with matching gifts. ``No one has done more to help Columbia Law School,’’ Schizer said at the time. 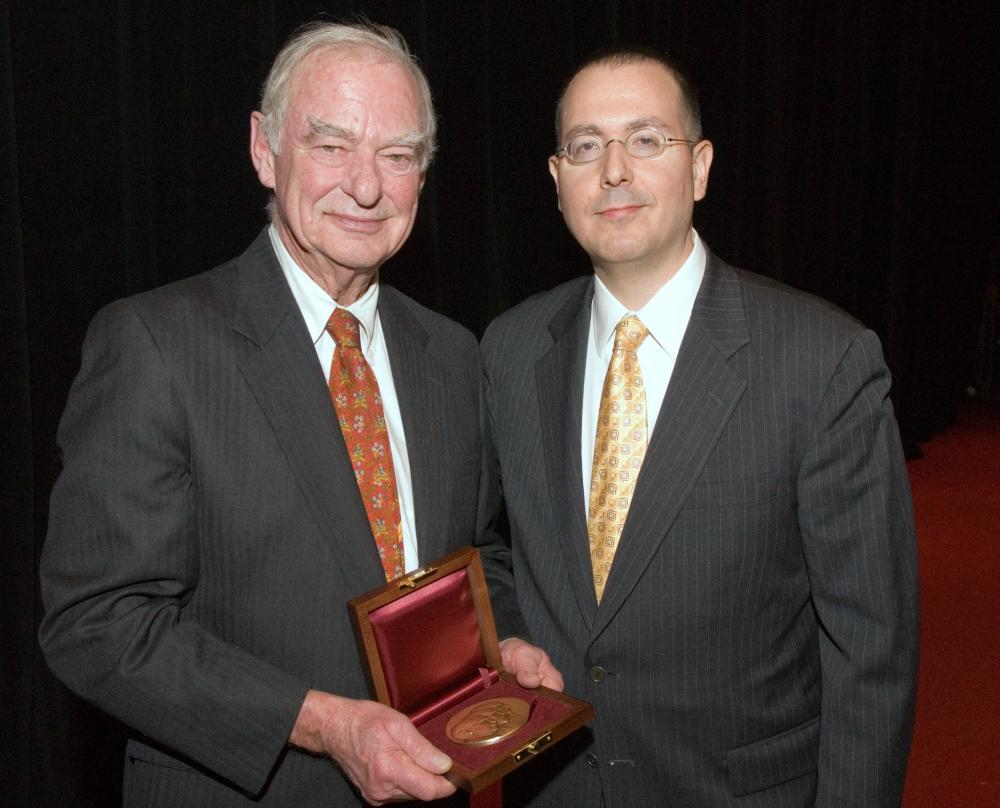 H.F. (Gerry) Lenfest '58, left, accepts Medal for Excellence presented by Dean David M. Schizer in 2008
In a story about the new media institute, posted on Philly.com, Lenfest said that donating PMN—which he’d purchased for $88 million in May 2014—provides a plan for succession and the future survival of the local news outlets. "Of all the things I've done,” he said, “this is the most important."