Montana Gov. Stephen Bullock ’94 delivered the keynote address at the fundraising gala, held at The Metropolitan Museum of Art.

With the ancient Temple of Dendur at The Metropolitan Museum of Art as a dramatic backdrop, Columbia Law School celebrated the launch of a $300 million fundraising campaign at a black-tie gala on Oct. 16. "We are like the architects who built this temple, the masons who laid the stone, the visionaries who saw its creation to completion," said Gillian Lester, Dean and the Lucy G. Moses Professor of Law, in a speech before 300 alumni, faculty, and other distinguished members of the Law School community. “We make the institutions that protect our society, that evolve it, that enable a just future.”

Stephen C. Bullock ’94, the charismatic governor of Montana who is being talked about as a possible Democratic presidential candidate in 2020, delivered a moving and rousing keynote address. He explained that Columbia Law’s Loan Repayment Assistance Program (LRAP) was crucial in affording him the flexibility to pursue a public interest career.

“In 1991, I showed up at Columbia with a credit card and a pen to sign student loans, and little more,” he said. Bullock graduated with a job at a big New York firm, where he worked for two years until returning to Montana to be near his father who had terminal lung cancer.

“I exchanged my Midtown office for a cubicle at the Montana Department of Justice,” he continued. “Recognize, were it not for Columbia’s public interest loan repayment program to help cover my student debt, I couldn’t have moved home to take care of my father and work at the Attorney General’s Office. And it was working there, as a baby lawyer, doing meaningful work that impacted people’s lives, that made me want to become attorney general, then governor.”

The equally lofty ambitions and inspiring accomplishments of the current generation of J.D. students were spotlighted in a short film shown during the dinner, which illustrated the campaign’s “We Were There” theme.

Dean Lester was then introduced by Student Senate President Ramsey Fisher ’18. “Every time I work with Dean Lester, I'm immediately reminded how personally vested she is in our potential to become movers and shakers in our society,” said Fisher. “She's a great Dean and an even better person.”

In her remarks, Dean Lester cited the historic contributions of Columbia Law’s faculty and alumni in shaping the law and society since the school’s founding in 1858—from drafting rules of conduct during the Civil War, forging the New Deal, and defining the term “refugee,” to crafting the concept of “net neutrality,” striking down “separate but equal,” and arguing for marriage equality at the Supreme Court.

“We were there!” Dean Lester declared “That is what the Campaign for Columbia Law is about. Because where we have been shows us where we can go. And what we have done, shows us what we can do.”

The gala, which began with cocktails in the museum’s Great Hall, was an elegant display of the Law School’s intellectual might and tradition of leadership. “At the Met tonight, we have a room full of Columbians, thinkers, and doers who are molding and mending our society year after year,” said Dean Lester. The other featured speakers were Michael I. Sovern ’55, the Chancellor Kent Professor of Law and president emeritus of Columbia University; Lee C. Bollinger ’71, president of Columbia University; Alison S. Ressler ’83, campaign co-chair; and Olatunde Johnson, the Jerome B. Sherman Professor of Law and vice dean for intellectual life. Professor John. C. Coffee Jr., chair of the Faculty Campaign Cabinet, was recognized by Sovern for securing donations from 100 percent of the Law School’s faculty. 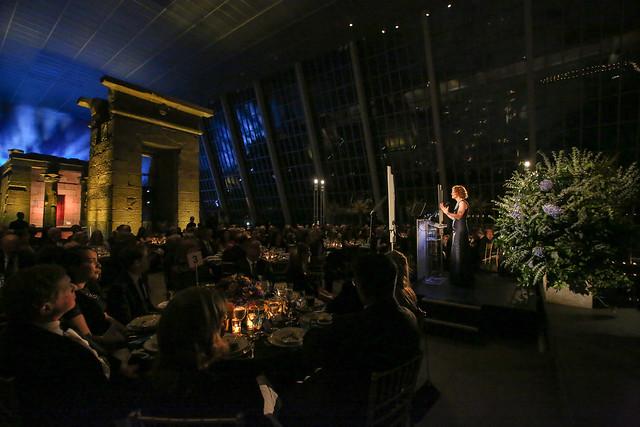 The Campaign for Columbia Law has already received pledges of $105 million, including a $15 million gift from the Jerome L. Greene Foundation. In addition to Ressler, the campaign is co-chaired by Brad Smith ’84 and Kathy Surace-Smith ’84 as well as honorary co-chair H.F. “Gerry” Lenfest ’58. During the next five years, the Campaign for Columbia Law aims to raise $100 million for scholarships and other student financial aid; $100 million for faculty and their research; $40 million to renovate the Arthur W. Diamond Law Library; $40 million for the Annual Fund; and $20 million to increase opportunities for experiential learning and expand the Law School’s 10 clinics.

At the end of the evening, Dean Lester reminded everyone that the Campaign for Columbia Law is fundamentally about ensuring that the Law School community continues to be a force for justice at every turn of history: “We can’t be there without you!”

Visit the Campaign for Columbia Law