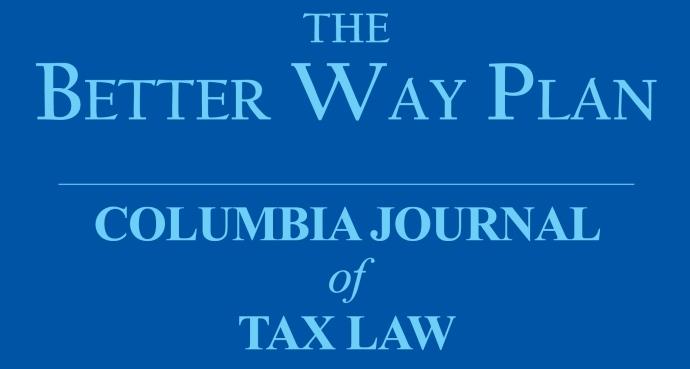 The Columbia Journal of Tax Law released a remarkably timely and comprehensive special issue today—a guide to the House Republicans’ tax reform package, which has been described by Washington insiders as the most significant tax reform since the country first enacted an income tax in 1913.

“For anyone thinking through the implications of the [reform] plan,” writes Columbia Law School Professor Alex Raskolnikov in his introductory essay to the special publication, “this issue is a must read.”

For individuals, the GOP tax package, unveiled this past June under the title “A Better Way: Our Vision for a Confident America,” would, among other things, substantially reduce marginal income tax rates, increase standard deductions, and eliminate most itemized deductions. For businesses, the impacts would be even more dramatic. The proposal would abolish the corporate income tax and replace it with a species of consumption tax—a cousin of the value added tax (VAT) widely used abroad—but one that has never before been implemented in any developed country. This specific flavor of consumption tax has been formidably dubbed the “destination-based cash-flow tax.”

The special issue of the Columbia Journal of Tax Law was proposed by Raskolnikov (the journal’s primary faculty adviser) in January. “After the election, there was suddenly a realistic chance that the Better Way plan could get enacted,” said journal Editor-in-Chief Arisa Manawapat ’17. Raskolnikov suggested a range of authors to contribute papers for the project, she added, so that it would reflect the perspectives of both policy analysts and practitioners.

Columbia Law Professor Michael Graetz leads off with an overview of the plan’s novel corporate consumption tax, which, borrowing the terminology of former Defense Secretary Donald Rumsfeld, he breaks down into of a list of “known knowns” and a longer list of “known unknowns.”

“The list of unknowns is long and daunting,” Raskolnikov writes of Graetz’s findings. “[But] why should we expect anything different from an attempt to enact a system that does not exist—and has never existed—anywhere in the world?”

Next, the issue delves into the intellectual history that led to the GOP plan in an article written by Professor David Weisbach of the University of Chicago Law School.  Weisbach explains that the proposal, put forward by Chairman of the House Ways and Means Committee Kevin Brady and Speaker of the House Paul Ryan, is “essentially the same” as one advanced by a tax reform panel convened by President George W. Bush in 2005, which was, in turn, a modification of two still earlier consumption tax proposals, known as the Flat Tax and the X Tax.  Weisbach concludes that the GOP plan, as it stands, would present a variety of problems in practice, some of which could be “easily fixed,” though others would “require structural changes.”

The third article explores the significant international challenges posed by the plan. Professor Reuven Avi-Yonah, of the University of Michigan Law School, and Professor Kimberly Clausing, who teaches economics at Reed College, argue that aspects of the Republican plan violate U.S. obligations under World Trade Organization rules and certain tax treaties the U.S. has signed.

Estimates of the fiscal impact of the plan come next, in a piece authored by five staffers at the Tax Policy Center, a joint venture of the Urban Institute and Brookings Institution. They conclude that the plan would reduce federal revenues by at least $3 trillion over the first decade. That loss of revenue would lead to an increase in the national debt by $3.6 trillion over the first 10 years (when interest costs are taken into account), and by as much as $9 trillion after the first 20 years.

Finally, the issue closes with an analysis of what all these seismic changes would mean for attorneys trying to advise clients, written by practicing tax lawyer David S. Miller of New York’s Proskauer Rose law firm. Though the Better Way plan “promises a simpler tax code,” Miller writes bluntly, “this will be a broken promise.”

For anyone seeking to understand the GOP tax reform package and its implications—be they policy analysts, practicing attorneys, legislators, journalists, or just taxpayers—the issue offers a wealth of insight, historical context, and critical analysis.

“This special issue . . . will serve as an invaluable educational tool for those studying the plan or working to improve it,” writes Raskolnikov. “It will also serve as a guide for those brave enough to forge ahead.”

The Columbia Journal of Tax Law is published twice a year, and provides a forum for academics, practitioners, and policymakers to explore ideas in tax law and policy.