Columbia Law School was the only team from the United States to make the final competition. The three other competing teams were the College of Europe (Bruges), Zagreb University and Heidelberg University. The four finalists had prevailed in multi-round regional competitions among 48 teams, which were culled from an even larger pool that submitted ELMC briefs in November 2007.

Ganesh, randomly selected in the final competition to represent the Columbia Law School team, argued before Judges Marko Ilešič and Aindrias Ó Caoimh of the European Court of Justice (ECJ) and Nicholas James Forwood of the Court of First Instance, an independent court attached to the ECJ. 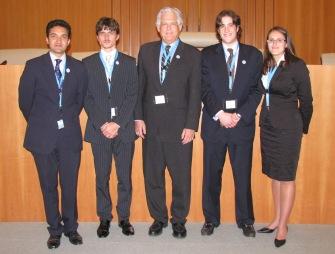 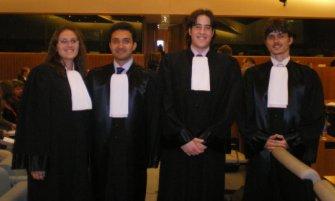 (Left to right) Wirtz, Ganesh, Lawrence and Samulevicius in required
robes at the European Court of Justice

More information about the ELMC and Columbia’s victory at regionals is available at http://www.law.columbia.edu/media_inquiries/news_events/2008/march2008/elmc.

ELMC, founded in 1988, is the second largest international moot court competition in the world, and considered the most prestigious in Europe. A case addressing a problem of European law is set each year under the auspices of the European Law Moot Court Society.