Team is One of Four to Argue before European Court of Justice
Press Contact: Sonia von Gutfeld, 212-854-1453, [email protected]

Columbia Law School prevailed at the European Law Moot Court (ELMC) regional tournament in Maribor, Slovenia, and will be one of four teams to compete at the final round before the European Court of Justice in Luxembourg. Representing Columbia were students Aravind Ganesh ’08, Alexander Lawrence ’10, Tomas Samulevicius ’08 LL.M. and Sandy Wirtz ’09. 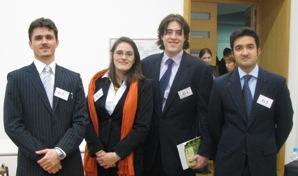 ELMC, founded in 1988, is the second largest international moot court competition in the world, and considered the most prestigious in Europe. A case addressing a problem of European law is set each year under the auspices of the European Law Moot Court Society.

This year’s case concerns a fictitious European island nation that, faced with threat of global warming floods, put out contracts for bid to build new dams. The country ultimately employed workers from another country, which drew protests from domestic unions. Among the complex issues at play are European labor law, the fundamental right of association under the European Convention on Human Rights, freedom of movement, and questions of how to evaluate contracts.

Columbia, one of a handful of teams from American law schools to compete against teams predominantly from Europe, faces the added challenge of navigating a legal system that is not their own. This requires poring through treatises on European law to learn the basics and becoming fluent in new research systems within weeks. French-speaking team members also practice arguing in that language, as additional points are awarded during the competition for presenting in both French and English.

Columbia Law School has participated in ELMC for the past three years and, facing high student demand, for the first time entered two teams in the competition.

“They were such a strong bunch that we couldn’t just limit it to one team,” said Karen Lin ’09, an ELMC competitor in 2007 and a coach this year, who helped select two teams of four from nearly four dozen interested Columbia Law School students.

Lin and Spencer Wolff ’09, who in 2007 participated in brief-writing for ELMC, coached their respective teams through all phases of the competition, including research, brief-writing and mock arguments. Practices also took place before Professor George Bermann, the faculty advisor, and Visiting Professor Olivier de Schutter.

The moot court process is arduous. Each team must submit a set of briefs – one for the role of applicant, one for respondent and one for the advocate-general – in November. In mid-January, ELMC announces its selection of 48 teams to attend regional competitions. Four groups of 12 teams compete in oral arguments, and the winner of each regional tournament advances to the final face-off in Luxembourg, scheduled this year for April 3-4.

Columbia’s other team – represented by Amy Bharj ’08, Emmanuel Gastard ’10, Alissa King ’10 and Jantira Supawong ’10 – will participate in its regional tournament in Bangor, Wales, from March 7-9.

“The possibility of a Columbia-Columbia face-off in the final round is very exciting,” said Wolff, who leads the Bangor team.

No matter the outcome, Law School students have enjoyed immersing themselves in a different legal system from what their Columbia training focuses on and working together to tackle a difficult legal problem.

“We’ve had these sudden revelations when all the pieces fit together,” said Ganesh, whose performance at the final round in Maribor secured Columbia’s spot in the Luxembourg competition. “Those moments make being a student really nice.”