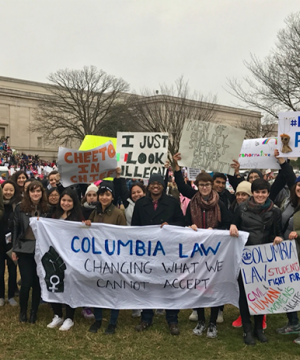 By most estimates, some 500,000 people participated in the Women’s March on Washington, D.C., this past Saturday. And, thanks to Madeline Hopper ’18 and Alexsis Johnson ’18, about 50 Law School students were among the participants.

As soon as organizers began planning the Women’s March on Washington, Hopper and Johnson started organizing as well—raising money and coordinating support from Law School student groups, offices, and even professors, to charter a bus to bring CLS students to D.C. to march. “As a law student who finds additional examples of inequality in my casebooks and classrooms every day, I wanted to march for myself and other women of color to remind my classmates and fellow protestors that the fight for racial inequality, in addition to the fight for gender equality, is far from won,” says Johnson, who will be working at Skadden, Arps, Slate, Meagher & Flom this summer.

By the end of December, the two had raised $3,149—the amount they needed—plus had a waiting list of 90 students for the one-day trip to Washington, D.C. “We weren’t sure how many people would be interested, particularly months in advance,” said Hopper, who will intern at the Center for Reproductive Rights this summer. “But the response was amazing.”

Hopper and Johnson share photos and moments from the march:

"At Columbia, there has been an outpouring of solidarity and community-building among students over the past few months: new pro bono projects, safe community spaces, calls to action, and other efforts. We wanted to provide an opportunity for law students to join the Women’s March on Washington to continue that solidarity and community-building in the larger context of the national movement. We marched to affirm for ourselves, each other, and our current and future clients and employers that we will defend and support one another.

"The Women's March on Washington was a powerful demonstration of the passion, organizing, and activism of hundreds of thousands of women and their allies. We were so grateful and proud to be a part of this historic moment, and look forward to making the causes and issues we marched for on Saturday present in our advocacy work always." — Madeline Hopper and Alexsis Johnson 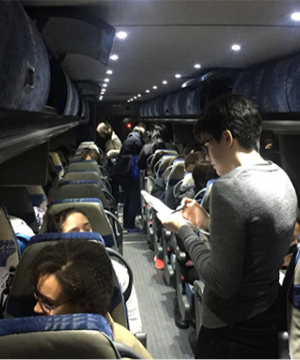 Madeline Hopper checking Clara Kent ’19 off the manifest. As students got ready to leave Jerome Greene Hall at 4:30 a.m., the mood on the bus was one of excitement, impatience to arrive in D.C., and a little bit of sleepiness. 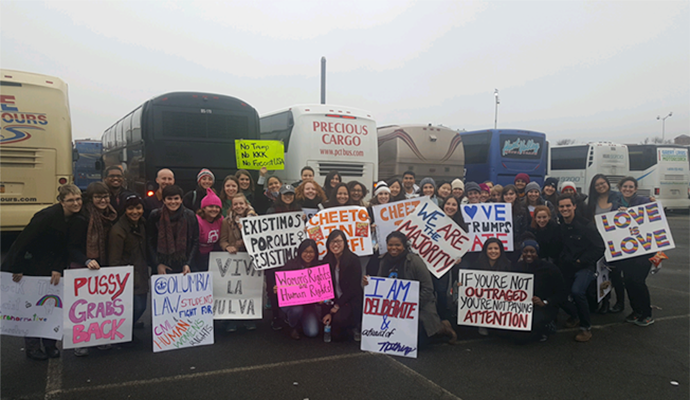 Lots of signs and smiles. Arriving in D.C. at 9 a.m., we were ready to march. 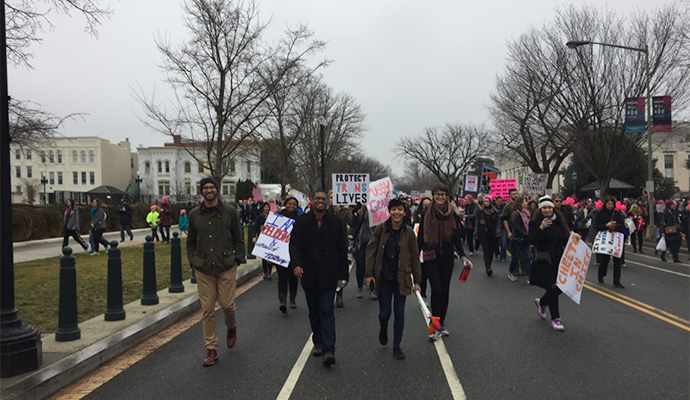 FROM LEFT: Julian Clark (NYU Law Class of 2019), Patricia Okonta ’18, Wolete Moko ’18, Alexsis Johnson, Rachel LaFortune ’18, Heidi Guzman ’19, and more walking to the rally point. We walked the two miles from our bus to the rally point near the National Mall. 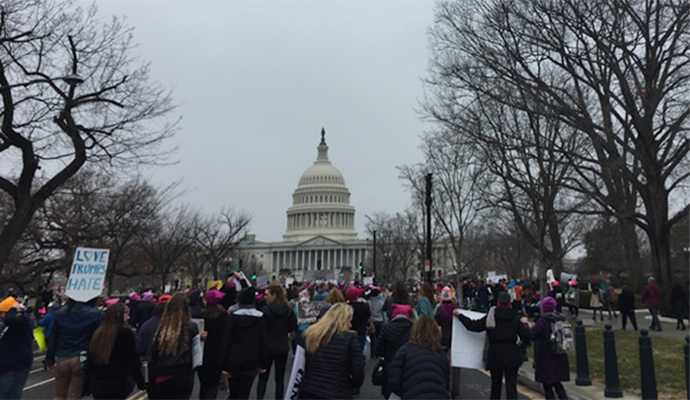 Our walk to the rally point took us past the Supreme Court and the United States Capitol Building, reminding us of where we will be continuing to fight for some of the important issues highlighted by this march after January 21, 2017. 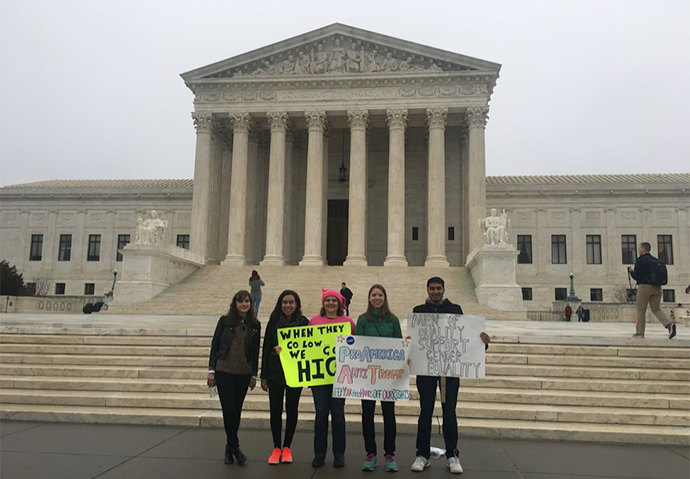 FROM LEFT: Ashley Gregor ’19, Sarah Jackson ’19, Natasha Harnwell-Davis ’19, Taylor Wood ’19, and Ankit Jain ’19 stopping for a photo in front of the Supreme Court. 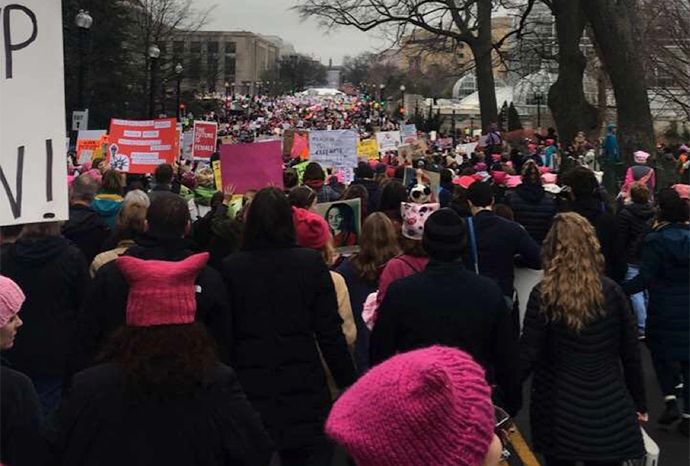 By 11 a.m., blocks away from the rally point and the National Mall, the crowd was shoulder-to-shoulder. 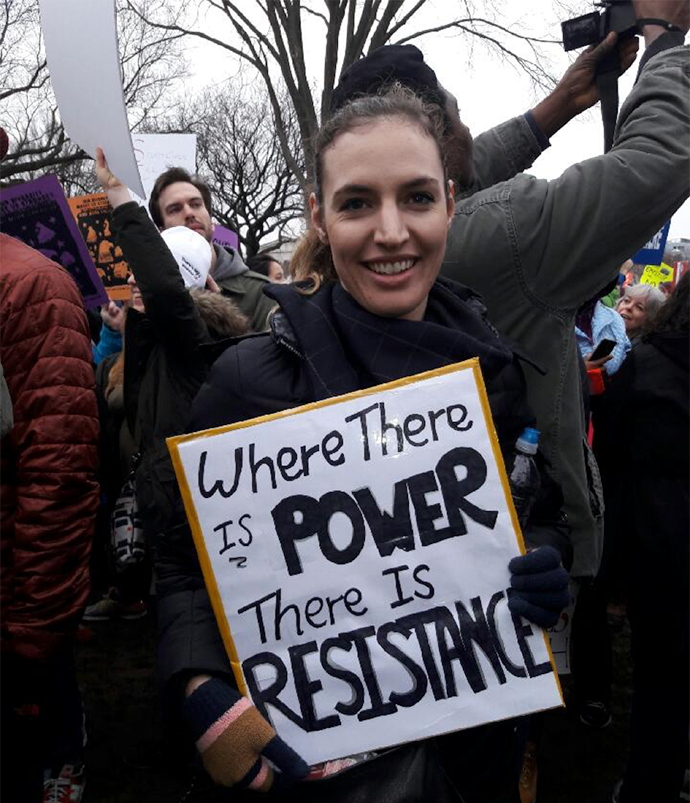 Alexandra Sinclair ’17 LL.M. carrying her message for the march. 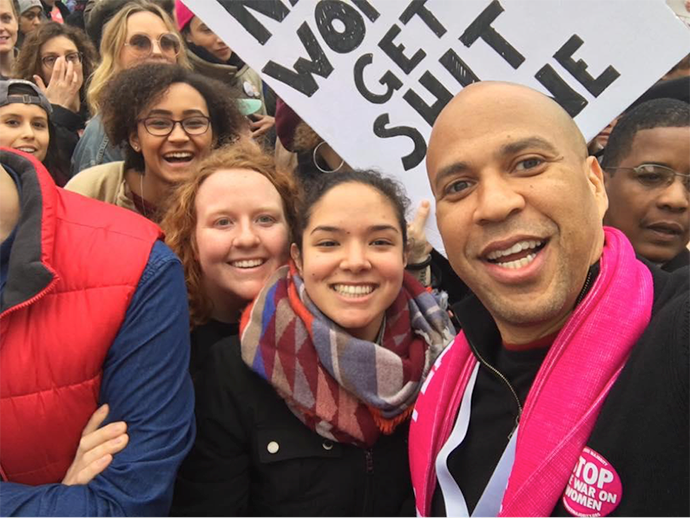 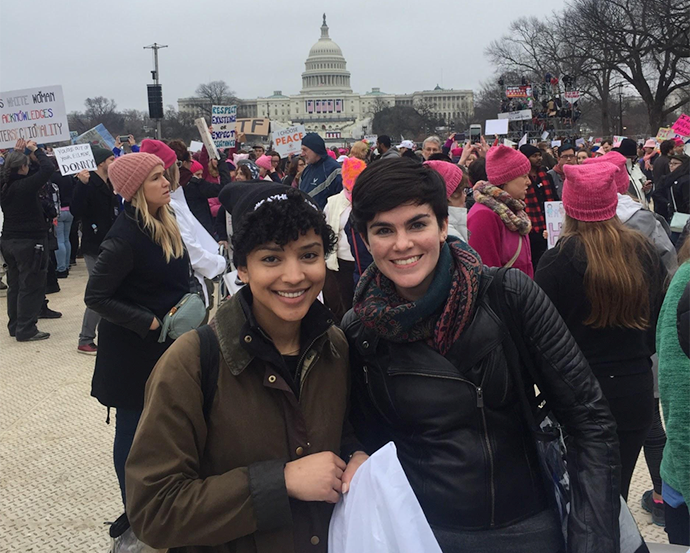 Johnson, left, with Hopper during the rally waiting for the march to start. We were so grateful to have the support of so many individuals and organizations in the Columbia Law community supporting our efforts. 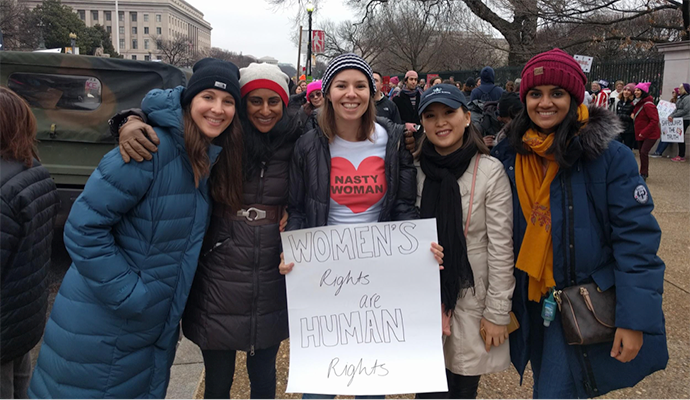 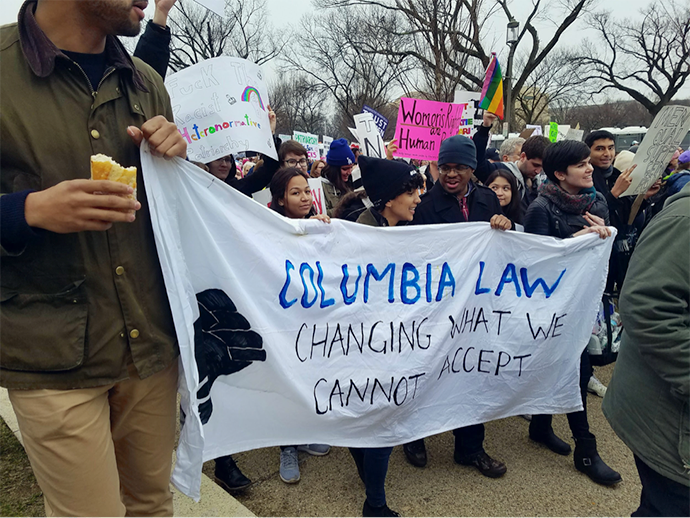 Letting everyone know who we are and what we stand for. With the huge numbers of marchers pouring into the blocks around the National Mall, and the whole Women’s March route, we finally decided to take matters into our own hands and march the length of the Mall.

Madeline Hopper ’18 is the president of Columbia Law School’s chapter of If/When/How: Lawyering for Reproductive Justice, and the symposium and special projects editor of the Columbia Journal of Gender and Law. This summer, Hopper will be interning at the Center for Reproductive Rights. She plans to make a career of reproductive justice advocacy after graduating.

Alexsis Johnson ’18 is dedicated to increasing the regular recognition and classroom discussion of intersectional issues here at Columbia Law School. This summer, she will be returning to the New York office of Skadden, Arps, Slate, Meagher & Flom. Johnson is a staffer on the Columbia Law Review and currently serves as a board member for Empowering Women of Color and QTPOC. After graduation, she’ll continue her lifelong project of carving out space for marginalized voices and advocating for racial and economic justice.