CLS Students Invited to State of the Judiciary Address

Two students from the Lawyering in the Digital Age Clinic were cited for their work on the Collateral Consequences Calculator by Judith S. Kaye, chief judge of the state of New York, during her State of the Judiciary Address on February 26.  The event took place in Albany and was attended by the state attorney general, top judges and court officials, key members of the legislature, and students Melody Wells '08 and Harris Cohen '07, who were asked to stand in recognition of their achievement.

The Collateral Consequences Calculator is a web-based application in which users, after inserting a section of the New York Penal Law, are able to view a multilevel chart showing the collateral consequences that flow from a conviction under that section. This long-sought-after tool addresses the complex and vexing problem of predicting how a given crime or misdemeanor triggers additional but unrelated charges against defendants.   The calculator responds to the needs of judges, attorneys, legal researchers, and law students.  It is currently in beta-testing and is slated to launch this spring.

This is not the first time the Digital Age clinic has been recognized during the State of the Judiciary address.  Last year, students were acknowledged for creation of an innovative web site containing high-quality content managed by experts in the major areas of New York law where collateral consequences occur.  Over the past year, the Four Cs web site, as it is called, (http://www2.law.columbia.edu/fourcs/index.html) has received more than 12,000 visitors who have collectively viewed more than 30,000 pages of content.

In 2005, the clinic was mentioned in the State of the Judiciary Address for its role in developing a web-based automated system to guide self-represented tenants in housing eviction cases.  The program, modeled on a decision tree format, provides answers to a variety of questions about legal issues and tenant rights.   The program was specifically designed for litigants who reside in rent-stabilized apartments owned or managed by the New York City Housing Authority in answering nonpayment petitions.

The web cast, as well as a digital version of the address, can be found at http://www.courts.state.ny.us/ctapps/soj.htm

The Lawyering in the Digital Age Clinic is taught by Professors Conrad Johnson, Mary Zulack and Brian Donnelly.  Click here for more on the Clinic. 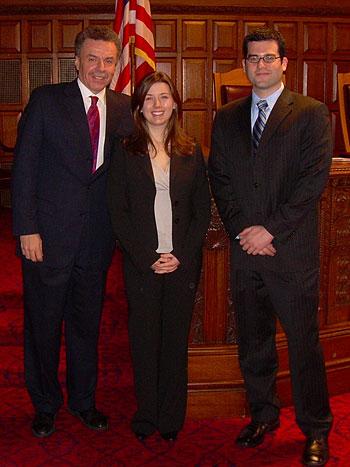