WHEN AMERICA HEADS TO POLLS THIS NOVEMBER, COLUMBIA LAW STUDENTS WILL HELP ENSURE VOTES ARE CAST AND COUNTED
By SONIA VON GUTFELD
With the 2008 presidential primary season in full swing, Columbia Law School students are planning a nation-wide effort to help ensure that every eligible voter gets to cast a ballot during the general election this November. The non-partisan student group founded at Columbia, called IMPACT, plans to train, organize and send thousands of law students to monitor the polls. Ambitious, but not unprecedented: In 2004, its debut year, IMPACT deployed 2,300 law student poll monitors to sites in 19 states.
Since 2004, IMPACT has focused on local elections. On Election Day 2006, two months into her first year at CLS, Laura Gleen ’09 volunteered with IMPACT at a polling site in Brooklyn, where she helped voters cast their ballots after they had encountered a broken machine.

Gleen, who worked with the non-partisan organization Rock the Vote before law school, has taken the reins as IMPACT president. The group’s 12-member board plans to target battleground states by recruiting students locally, taking “lessons from 2005 and 2006 of the importance of community involvement,” Gleen said.
One challenge the group faces is turnover: All participants from 2004 have graduated, so IMPACT must “reignite the spark” at their peer schools, said Gleen. National networks like the Black Law Students Association and Latino/a American Law Students Association effectively reach students across the country; professors are also important school contacts.
On the upside, the ever-earlier presidential primaries have galvanized interest among law students, many of whom are politically motivated along the full spectrum but don’t have time to work on a partisan campaign, said Gleen.
As she gears up for the 2008 election, Gleen speaks regularly with IMPACT’s first president, Maggie Williams ’05, who after graduating founded the Voter Enfranchisement Project at the Bronx Defenders and now works for MoveOn.org. 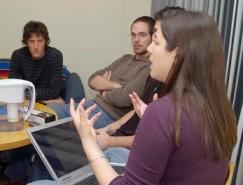 Gleen leads a recent IMPACT strategy meeting.
While at Columbia, Williams felt compelled to help protect voting rights after seeing “Unprecedented,” a documentary about the 2000 election in Florida. The film focuses on people improperly struck from the voting rolls, such as those convicted of felonies from other states, and even people with names similar to those of convicted felons.
“We need to address voting rights issues year round, but there are problems that can be solved on Election Day itself,” Williams said. She and a group of seven Columbia Law students spoke with election lawyers and activists and decided to launch a voter education and poll monitoring project in 2003.
“Imagine if there had been law students outside the polls [in 2000] when people were getting turned away incorrectly,” Williams said. “How many voters would we have been able to assist?”
On Election Day 2004, 25 busloads of Columbia and other New York area law students headed to polling sites in key swing states — states where concerns about voter intimidation run on both sides of the party line — including Pennsylvania, Ohio, New Hampshire and Florida. Students from more than 150 law schools across the country participated overall.
Volunteer monitors are not allowed to enter polling stations unless asked to by a voter or poll worker. IMPACT members established their presence by wearing black T-shirts that read in white capital letters, “You have the right to vote,” and handed out state-specific information booklets titled “Voters’ Bills of Rights.”
Poll monitors helped answer voters’ questions and reported problems, such as broken machines, inappropriate requests for identification, or improper administration of provisional ballots in lieu of emergency ballots, to officials at Election Protection, a national non-partisan coalition with whom IMPACT established a partnership in fall 2003.
Working with Election Protection, a network headed by Lawyers’ Committee for Civil Rights Under Law, helps poll monitors more effectively offer assistance to voters. Because poll monitors are volunteers, they rely on relationships with official staff, policemen and voters to report problems. People are also more likely to recognize those visibly affiliated with Election Protection as someone they can trust to be non-partisan and provide genuine help to cast a ballot, said Gleen.
In addition to voters, law students also have served as resource for poll workers. In 2004, many workers had received limited training on how to implement some of the changes of the Help America Vote Act (HAVA) and often turned to the law student monitors for assistance, said Laila Hlass ’06, who handled IMPACT’s media relations.  HAVA’s changes included new rules for provisional ballots, access for people with disabilities, and upgraded voting machines.
Poll watchers logged their findings, so voting rights groups have information they can use in long-term election reform efforts. Law students also staffed Election Protection hotlines at phone banks across the country alongside lawyers to address questions or complaints from voters on Election Day and in the days leading up to it.
The publicized presence of law student poll monitors also may have deterred intimidation tactics, Hlass said.
IMPACT considered poll monitoring an especially good fit for law students, whose schedules are more likely than lawyers’ to accommodate trips to battleground states such as Ohio for Election Day.
At the same time, poll monitoring requires knowledge of election law. It also strengthens the commitment of future lawyers to public interest service, said Williams.
IMPACT members brought multiple talents to the project. One student who had worked in fundraising served as development director, a former consultant helped figure out the nuts and bolts of who would be where and when, and several students with experience on political campaigns used their grassroots organizing skills.
IMPACT recruited students through existing national networks, such as the American Constitution Society, to whose Columbia branch Williams and other founding members belonged. By summer 2004, they had established coordinators at 70 law schools across the country.
When school resumed, CLS students led trainings sessions at New York law firms for lawyers participating in the Election Protection effort and at peer schools such as Yale, Fordham, NYU, Cornell, Cardozo, Georgetown and University of Pennsylvania. Phone trainings reached a number of other schools.
“If there was someone like Maggie at another law school, then tons of students would get involved,” said Jonathan Miller ’05, a founding member of IMPACT.
So dedicated was Williams that she spent the fall of 2004 – the first semester of her 3L year –at Georgetown so that she could work full-time in Washington, D.C., organizing for Election Day.
The 2004 effort took incredible energy, and Election Day itself was grueling. Hlass recalled arriving home from Ohio at 5 a.m. the next morning, then going to a 7 a.m. deposition for a Law School clinic. But the rewards of poll monitoring are substantial.
“Unlike other areas of the law where it can take a very long time to see results, this is something that’s happening in real time,” said Gleen, looking to November 2008. “It’s very satisfying to have an immediate impact.”