CLS Profs File Advocacy Briefs on Two Supreme Court Cases
By Miriam Furman
In 1994, 18-year-old Jose Medellin, a Mexican national, was convicted of murdering two young women a year earlier in Houston, Texas, and was subsequently sentenced to death. While on death row, he contacted his consulate, which brought his case, and the cases of 50 other Mexican nationals convicted of crimes in the U.S., to the International Court of Justice (ICJ), which ruled in 2004 that the nationals were entitled to receive review and reconsideration of their convictions and sentences through the U.S. judicial process.
The world court ruled in Avena and Other Mexican Nationals that they had been deprived of the right to consult their consulate before their trial took place under the 1963 Vienna Convention on Consular Relations. President Bush instructed the Texas Court of Criminal Appeals to abide by the ICJ ruling, but that court argued that the decision was not binding on state courts. The case now rests with the U.S. Supreme Court, whose decision this spring could be influenced by an amicus brief submitted by Professor Lori Damrosch.
Columbia Law School professors who are leaders in their field regularly author amici curiae briefs to advise the Supreme Court of points of law. In two important international law cases this term, Damrosch and Professor Sarah H. Cleveland – who wrote part of a brief in Boumediene v. Bush and Al Odah v. U.S.A -- may have a hand in shaping the international debate about human rights.

Medellin v. Texas
The Medellin case tests whether U.S. courts must follow international law specifying that foreign nationals are entitled to consular consultation before they are tried and convicted of a crime. Damrosch, Henry L. Moses Professor of International Law, authored an advocacy brief on behalf of Medellin because of her conviction in the supremacy of international law.
Damrosch discussed the two main issues at stake in this case:
1.      Did the President act within his authority when he determined that the states must comply with the U.S.’s treaty obligation to give effect to the Avena judgment in the cases of the 51 Mexican nationals named in the judgment?
2.      Are state courts bound by the Constitution to honor the Avena judgment to which the U.S. is a party?
“Refusal to grant the remedy for the Vienna Convention violations determined by the ICJ regarding petitioner’s treaty claims would undermine U.S. ability to insist on compliance by other states with their obligations under the Vienna Convention,” Damrosch said.
A former senior State Department lawyer who represented the U.S. before the ICJ in the Tehran-hostages case (1979-1980), she organized a group of law professors with Justice Department or international law experience to sign her friend-of-the-court brief. Damrosch added that she authored the brief to see international law upheld, and not because the case involves capital punishment.
“The [nine] professors who signed this brief did so because they believe that lower courts are obligated to respect the international court’s jurisdiction,” said Damrosch. “Our beliefs differ on the death penalty. For us, that’s not what this case is about.”
“The Supreme Court has never fully confronted [ruled on] an international judgment before this case,” she said. “It hasn’t ruled on whether a binding judgment on the U.S. government is binding on the lower courts.”
Columbia Law Professors Richard Gardner and Louis Henkin, both specialists in international law, signed the brief, as did seven international-law professors from other institutions. The Supreme Court heard the case on October 10, 2007. Damrosch attended the oral arguments, which ran longer than usual, she said.
Boumediene v. Bush and Al Odah v. U.S.A. 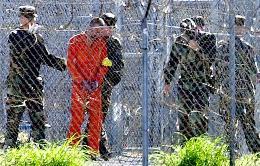 Photo credit: AFP/Getty Images
The right of detainees/prisoners in U.S. custody to challenge the legality of their detainment—the right to habeas corpus-- is being tested in Boumediene v. Bush. The right to habeas corpus should be protected for all, asserted Sarah Cleveland, the Louis Henkin Professor of Human and Constitutional Rights, who wrote a section of the amici curiae brief signed by 24 law professors with expertise in habeas corpus and federal jurisdiction on behalf of the petitioners in two consolidated cases:  Boumediene v. Bush and Al Odah v. United States of America. (Professors Vincent Blasi and Phillip Bobbitt were among the signatories.)
These are the facts of the case:
In 2002 Lakhdar Boumediene and five other Algerian natives were seized by Bosnian police as suspects in a plot to attack the U.S. embassy in Bosnia.  Classifying the men as enemy combatants in the war on terror, the U.S. government detained them at the Guantanamo Bay Naval Base, on land that the U.S. leases from Cuba. Boumediene filed a writ of habeas corpus, claiming violations of the Constitution’s Due Process Clause and violations of other statutes and treaties.
In the meantime, Congress passed the Military Commissions Act of 2006, which denies combatants in a war on terror a number of rights and refers their appeals to military commissions rather than civilian courts. Legal commentators think that this case, argued on behalf of 37 Guantanamo detainees, may be the most important one on this year’s Supreme Court docket because it will test the constitutionality of the Military Commissions Act.
Cleveland, who clerked for Supreme Court Justice Harry Blackmun from 1993-94, worked with Professors Gerry Neuman at Harvard Law School and Harold Hongju Koh at Yale Law School.
“Aliens, like citizens, have a constitutional right to habeas corpus, which historically has included the right of enemy aliens and prisoners of war to challenge the legality of their detention,” the brief asserts. That right remains, even during a war on terror, unless there’s a valid suspension, ensuring that the Executive [branch] detains individuals only in accordance with the law.
“Petitioners were deliberately transported to a highly secure base at the very threshold of the United States, to be detained, interrogated, tried and perhaps even executed,” the brief states. “Serious questions exist regarding the basis for their detention.”
“The right to habeas corpus is the most fundamental constitutional right we have,” Cleveland said. “It has its roots in [England’s] Magna Carta. If the Supreme Court holds that the U.S. can detain people on Guantanamo without allowing them recourse through the courts, this would shock the world.
“The Court must confront the question, ‘If both Congress and the President agree that we need the Military Commissions law to ensure our national security, is this law unconstitutional?’ This is a rarely posed question, which is one reason why this case is so important.”
The U.S. government has lost three times on previous cases contesting the legality of its enemy combatant trial and detention policies, Cleveland said, adding that she hopes that the Court won’t issue a narrow opinion in the current case that would be difficult to use as precedent in other cases.
“I’d like to see an opinion acknowledging that basic legal protections apply to people in U.S. detention or custody abroad,” she said. The Court heard oral arguments on December 5, 2007.