“Participating in Fred Doug required a substantial commitment of time, energy and creativity,” said team member Felicia Gilbert ’10. “The return on the investment…reminded me why I am in law school. I am certain that Fred Doug will be one of my most positive, relevant and worthwhile experiences as a law student.”

Columbia students, all first-year J.D. candidates, competed with students – largely second- and third-years – from other law schools in brief-writing and oral arguments around a simulated problem. This year’s case concerned a high school student with special education needs who was suspended for wearing a T-shirt with messages about the Transatlantic Slave Trade and Holocaust. Arguments centered around the student’s First Amendment right to freedom of speech, Section 1983 of the Civil Rights Act and the Individuals with Disabilities Education Act.

Columbia Law School made a strong showing throughout the regional competition, with 10 of its 15 teams advancing to the “Sweet Sixteen” round, four to the quarterfinals, two to the semifinals and one to the finals. A total of 36 teams from 11 schools around the Northeast competed at the event, which was held February 13-17 in Newark, N.J.

The award for Best Oralist went to Tanisha Creed, while Best Petitioner Brief went to Alexandra Awai and Hiba Hafiz and Best Respondent Brief to Mia White and Katie Poynter. 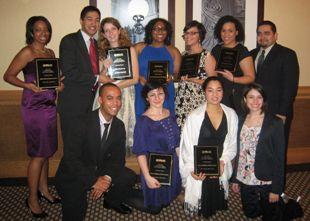 “Teamwork, feedback, empowerment — these are all gifts the Fred Doug experience has given me, which were so needed in my 1L year!” said Mia White. “The level of involvement from 2L and 3L alums speaks to how important and transformative this program is.”

Created and administered by the National Black Law Students Association, the Frederick Douglass Moot Court Competition is a national competition that focuses primarily on public law and topics of particular relevance to law students of color. It is one of several intermural competitions in which Columbia Law Students participate. Professor Philip Genty serves as the advisor to Columbia’s Moot Court Program.