AFRICAN NATION GETS HELP FROM ENVIRONMENTAL LAW CLINIC
Clinic Consults on São Tomé and Principe’s Laws to Solve Deforestation Problem
By MIRIAM FURMAN
February 29, 2008 (NEW YORK) – Two days after running the New York City Marathon in November, Won Park ’08, with classmate Sara Froikin ’08, embarked on a different type of trek, to a small country off the West African coast which faces deforestation. Their fact-finding mission to São Tomé and Principe (STP), part of their work in Columbia Law School’s Environmental Law Clinic, occurred after the country’s chief environment official asked for help in curtailing the problem from Columbia University’s Earth Institute. This spring, Park and Froikin, with Kristina Schwartz ’08 and Katherine Chiles ’09, will write a report that reviews the country’s environmental laws and presents laws and policy solutions implemented by other countries facing the same problem. 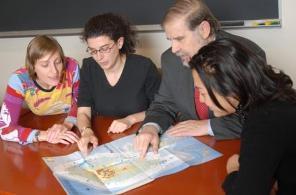 After a 14-hour trip via Lisbon, Park and Froikin spent a week meeting with STP government officials and timber company executives and touring São Tomé, the larger of the two islands that comprise this 700-square-mile former Portuguese colony covered with lush rainforest. Julia Neiva ’07 LL.M. accompanied the students as language facilitator and legal consultant.
“They [government officials] wanted us to look at their laws and see what works and what doesn’t,” said Edward Lloyd, the Evan M. Frankel Clinical Professor in Environmental Law, who explained that the clinic team is researching how other African countries and Caribbean islands have handled similar problems “with varying degrees of success.” The team initially investigated several environmental challenges facing STP, including beach mining, ocean fishing and ecotourism, but decided to concentrate on the pressing deforestation issue.
The clinic students saw first-hand the extent of the deforestation on this volcanically-created island roughly the size of Long Island’s Nassau County (the islands won independence in 1975). Some of the deforestation is attributable to a land reform act in the early 1990s. When the government [at the prodding of the World Bank], “subdivided the land, it chopped up the structure of the society; the plantations had been sources of technical expertise,” said Park. “Local farmers don’t have the funds or expertise to work these random plots.”  Subsequently, forests are chopped down to sell the wood as a way of making a living. 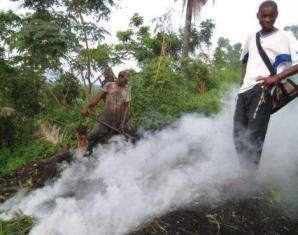 Residents make charcoal from the trees they cut down illegally.
People are also cutting down trees in the buffer zone surrounding the rain forest, which is supposed to be a protected area, said Schwartz. “They use some of the land to farm vegetables,” said Froikin.
Exacerbating the problem is the island’s poverty, coupled with the fact that the country’s main crops are cocoa and coffee, which thrive in shade.
“Poor people don’t have ways to support their families, so they cut down the wood and sell it. They also sell charcoal they make from the trees,” said Prof. Lloyd.
“Sara and Won were able to get opinions [about the deforestation problem] from different sectors of the country,” said Schwartz. In addition to government ministers, they met with officials from NGOs and high school students concerned about the environment. 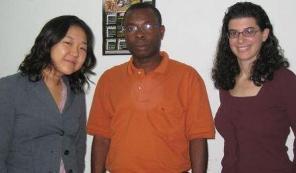 Students Won Park '08 (left) and Sara Froikin '08 (right) meet with Sabino Carvalho (center), director of São Tomé’s Forests Directorate, during their week-long trip in November 2007.
The students bring strong backgrounds in environmental and public service work to the project. Froikin worked at the Hudson Riverkeeper project in Tarrytown, N.Y., prior to law school, and studied environmental policy as an undergraduate. Park lived in China before coming to Columbia Law, working on environmental issues with the American Bar Association’s Asia Law Initiative, and spent a summer during law school at China’s National Resources Defense Council.  Schwartz brings experience and an interest in human rights to the project. “We can’t study the [deforestation] problem in isolation,” she says. “The reasons behind it must be considered.”
The Earth Institute, funded by the Open Society Institute, has been providing technical and legal assistance to STP officials on a range of development and legal issues since mid-2003.
This is hardly Columbia Law School’s first foray into Africa or Sao Tome. The Law School’s Human Rights Clinic, which has been reviewing oil and mining contracts so that governments can obtain a fair share of revenues, has been involved in drafting and implementing Sao Tome's oil law since 2003. Clinic Director Peter Rosenblum also directs the Sao Tome project for the Earth Institute.