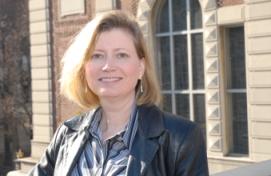 Barb Pitman has gone from foster child in Indiana to Columbia law student with marriage, children and her college degree all in between.
“I had a noticeably compromised childhood – probably not the type that compares with the childhood of many of my classmates,” she said. “I figuratively pinch myself every day when I compare my childhood situation to where I’m at now and what I’m doing.”
Placed in foster care when she was six months old, adopted when she was four years old and then facing the divorce of her adoptive parents while she was still a child, forced Pitman to cope with adversity. She grew up on a steady diet of food stamps, free school lunches and hard work.
Pitman, who bussed tables at Dairy Queen at the age 14, graduated from high school with honors at age 17. With no financial or familial safety net, she took out loans, worked two jobs and put herself through two years of a business program at Ball State University in Muncie, Indiana.
With her associate’s degree in hand, Pitman landed a job as a secretary at Baker & Daniels, a large Indianapolis law firm. There, she met and married her husband, Tom, a Yale graduate and Harvard-educated lawyer, who is now a partner in the firm. Tom, the son of a taxi-cab driver, also came from humble beginnings.
The Pitmans raised two children, now both in college, and Barb pursued her bachelor’s degree at Indiana University while alternating between work and being at home with her children. She was a fire department volunteer commissioner in the town of Cicero, a speech and debate team coach at Hamilton Heights High School and Middle School in Arcadia, Indiana, and taught piano to underprivileged children.
In 2005, Pitman received her history degree with academic distinction, along with an award for her senior thesis: “Culture, Caste and Conflict in New Orleans Catholicism.” It was accepted for publication in the historical journal Louisiana History.
Pitman did well on the LSATs and Tom encouraged her to apply to law schools in the East. After searching the Web sites of leading law schools, Pitman set her sights on Columbia. It was the only school she applied to.
“The Law School’s professionalism and the maturity of the students I read about impressed me,” she said, adding that the idea of living in multi-cultural New York — after spending her entire life in Indiana — was also appealing,” she added.
Now immersed in her first year, Pitman, who’s interested in both employment and health care law, anticipates working again for an Indianapolis law firm after graduation — but this time as a lawyer, not a secretary.
- By Miriam Furman
Bibek Pandey 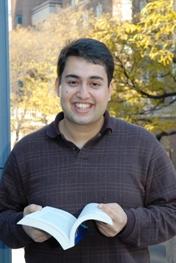 Columbia first-year law student Bibek Pandey, 26, chose Columbia Law School because of its world renowned scholarship in international relations and human rights.
“The law professors in these disciplines are the finest in the world,” he said. “It also appealed to me to come to New York. With the U.N. right here, it is the center of international and human rights law.”
An only child of middle-class parents, Pandey spent his formative years at a Jesuit-run private school in Nepal’s capital city of Kathmandu. His early education, closely-knit family and awareness of the poor socio-economic conditions in Nepal — the small, East Asian country that juxtaposes the grandeur of Mount Everest with a populace plagued by poverty and illiteracy —  motivated him to seek a career in law and economics.
“My grandfather, one of the first medical doctors in Nepal, studied abroad in the 1950s and chose to return to his native country to provide free medical care to poor villagers,” he said. “He was my role model.”
Pandey’s close bond with his mother and young aunts —whom he regarded as siblings — spurred his interest in fighting gender inequality in Nepal and other countries where women are oppressed educationally and economically. Three-quarters of adult females in Nepal are illiterate, an example of gender inequality contributing to the poor economy in a developing nation. “Nepal is one of the only nations in the world in which men outlive women, and there are very few female professionals,” Pandey said.
After high school in Kathmandu, Pandey came to the United States for his undergraduate education at Macalester College in St. Paul, Minnesota, where he received a double degree in political science and economics.
He was the only student in his graduating class to successfully defend two honors theses: an economics paper that used econometric models to study the influence of economic growth on women’s health and education status in developing countries and a political science thesis on the effect of the Maoist insurgency on Nepali women.
Pandey worked for two years after graduation as a research associate at the Spencer Foundation in Chicago, a private foundation that funds research to improve education in developing countries. He took a year off from work before entering law school to travel in Asia and volunteer in South Africa with a non-governmental organization involved with children’s rights.
Pandey has a human rights fellowship at Columbia Law School and is also pursuing a master’s degree in economic policy at Harvard’s Kennedy School of Government. He plans to receive both degrees in four years, which requires him to spend alternate years in Boston.
Although he may eventually work as an economist or academic, Pandey said he decided to get a law degree to open more options. “For me," he said, "law is a means to achieving social justice.”
-By Miriam Furman
Carina Wallance 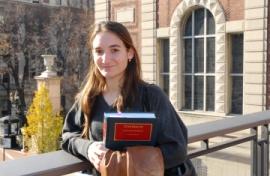 After her freshman year at Brown University, Carina Wallance visited her grandparents in Holland, though a family trip wasn’t all she had in mind.
“I went to The Hague to watch the Milosevic trial, which was open to the public,” she said. “It was moving to sit behind a glass wall and watch a witness testify to atrocities committed by the Milosevic regime while he listened from his bench in the back.”
Three years later, she was back to examine the same trial — this time on a Fulbright scholarship.
“I was looking at the trial critically, as a case study for genocide laws,” Wallance said. “For genocide, the legal bar is set pretty high, and at times the prosecutors were straining to meet that. But at the same time, you could understand how they felt pressure to expedite the trial.”
A semester abroad in Paris during her junior year sparked her interest in the law. While there she took law classes and because she is fluent in French, Spanish and Dutch (and speaks conversational Italian) she worked as a translator at the firm of White & Case.
“It was this exposure in Paris that got me thinking about law school and international law in particular,” Wallance said.
Wallance said that she is undecided about taking a job in public interest law upon graduation. Her experience at White & Case working on cases involving private companies has drawn her to corporate law, she said. “Ideally, I’d like to get some experience at a big, global firm that has offices around the world.”
-By Paul Wachter