Civil Liberties in the Age of Counterterrorism

America’s response to 9/11 has tested the nation’s commitment to civil liberties, as counterterrorism practices have included such extraordinary measures as indefinite detention, forced interrogation, targeted killings, and mass surveillance.

A current Columbia Law School seminar on “Civil Liberties and the Response to Terrorism” is co-taught by two experts who bring an intimate knowledge—and often opposing viewpoints—to a host of national security concerns. One instructor, Professor Matthew C. Waxman, held a series of senior positions in the last Bush administration, where he worked on counterterrorism policies. The other, Steven R. Shapiro, is the Legal Director of the American Civil Liberties Union, which has fought many of those counterterrorism policies in court.

“The course brings together faculty expertise from two very different perspectives,” explained Waxman, the Liviu Librescu Professor of Law and co-chair of Columbia Law School’s Roger Hertog Program on Law and National Security. “It's not about right versus left, or even security versus liberty, because we both believe very strongly that our constitutional system is designed and intended to provide security and liberty. But our experiences with the issues have been different. One of us has been inside the government's national security apparatus, and the other has spent his career challenging it.

“We also demonstrate very different ways in which one can use a law degree. Steve is a phenomenal career litigator, whereas I spent my time in government as a policy adviser. One of us has really focused on the role of courts; the other has experience inside executive-branch agencies.” 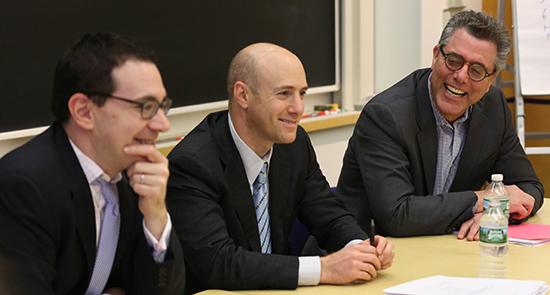 After graduating from Columbia Law School, Bahar went on to work as a Deputy Legal Advisor to the National Security Council in the White House, before becoming the General Counsel and Minority Staff Director for the U.S. House of Representatives’ Permanent Select Committee on Intelligence. As Bahar talked about the role of intelligence oversight committees in overseeing U.S. intelligence and surveillance programs, he reflected on what Waxman had taught him in that very same classroom. 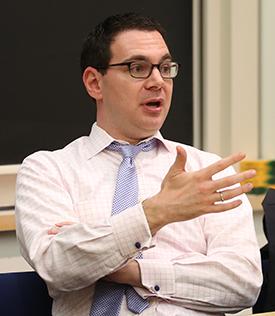 Before joining the Columbia Law School faculty in 2007, Waxman had served as the Deputy Director of the Secretary of State’s Policy Planning Staff, Deputy Assistant Secretary of Defense for Detainee Affairs, and a policy aide to National Security Advisor Condoleezza Rice. Since leaving government, he has continued to advise U.S. intelligence agencies. Earlier in his career, Waxman had worked as a defense analyst at the RAND Corporation.  Beyond the Law School, he is the co-chair of the Cybersecurity Center at Columbia University’s Data Science Institute.

As the Legal Director of the ACLU, Shapiro oversees a staff of about 90 full-time lawyers working on civil liberties cases across the country. Over the last two decades, he has acted as counsel or co-counsel on more than 200 ACLU briefs submitted to the U.S. Supreme Court.

Shapiro is on the policy committee of Human Rights Watch and served for many years on the board of Human Rights First. He started teaching constitutional law at Columbia Law School in 1995. For the past decade, he taught “Civil Liberties and the Response to Terrorism” alone. Shapiro reflected on the evolution of the class. 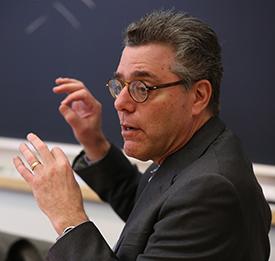 “A great deal has changed over that time: the CIA black sites have been closed, the torture program has officially ended, the Supreme Court has ruled that Guantanamo detainees have a constitutional right to seek judicial review of their detention, the drone program has escalated, and we have learned a great deal more about the extent of government surveillance,” said Shapiro.

“Other things have not changed: Guantanamo remains open, the military commissions are still a shamble, there has been no meaningful accountability—judicial or political—for past abuses, and we are still struggling to understand whether we are at war, where, and with whom.

“The course has inescapably evolved over the past decade as the law and the facts on the ground have evolved. At its core, however, the course still seeks to explore certain key tensions in any democratic society—between the individual and the state, between civil liberties and national security, and between the courts and the political branches,” Shapiro said.

Co-teaching the class with Waxman has been “both fun and interesting,” said Shapiro. “We bring different political perspectives; we also bring different life experiences. In class, we have focused more on the latter than the former. Matt often talks about his time in the executive branch and asks students to imagine themselves in a similar position.  I more often ask the class to think about the challenges and strategies of litigating in this area. The combination has worked well, and the class has been enriched as a result.”

They often call on each other to illustrate the constraints and pressures faced by policy-makers and litigators, Waxman said. “Steve might turn to me and ask, ‘Matt, how would a decision like this be made in the White House or inside CIA headquarters?’ and I'll turn to him and say, ‘Tell us about the difficulties of challenging this policy in court when much of the underlying information remains classified.’” 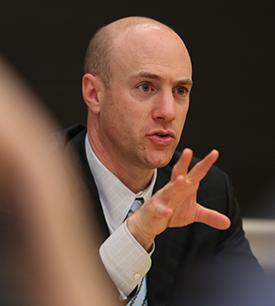 Michael Bahar reflects on the ideas he was introduced to when he was a student in Waxman's class.

Hearing diverse experiences in the subject area can make students more aware of problems and potential solutions. Waxman has pursued this approach in some of his previous classes. Two years ago, for example, he taught a national security law course with former U.S. Senator Joe Lieberman. He frequently brings in guests for class discussions. So far this semester, the seminar on “Civil Liberties and the Response to Terrorism” has brought in Bahar and ACLU attorney Alex Abdo, who related details from the recent Apple iPhone case and the ACLU’s successful fight to stop the federal government's controversial bulk collection of phone records.

“We have studied how some of these issues and the decision-making process have evolved since the September 11 attacks,” Waxman said, “but we are also looking historically at how the American constitutional system has wrestled with versions of these dilemmas going all the way back to the founding era.”