Young Stars of China’s Judiciary Learn About Torts, Civil Procedure, and U.S. Constitution as Part of a Unique Program at Columbia Law School

The private visit with Justice Ginsburg in Washington, D.C., marked one of the highlights of the innovative program, which offers the Chinese jurists and students the opportunity to study U.S. constitutional law, civil procedure, and torts at Columbia Law School.

“Justice Ginsburg’s words were filled with experience and wisdom, and illuminated her viewpoints on a spectacular career on the U.S.’s highest court,” said Deng Xuming, an intellectual property judge in Beijing’s central Dongcheng district. “I really appreciated hearing about the work she has done to open the doors for women judges.” 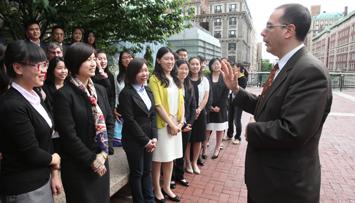 Deng is one of the 40 participants who spent four weeks learning about U.S. jurisprudence and interacting with peers in a unique setting. The Law School has hosted the program, which City University of Hong Kong operates in collaboration with the National Judges College of China, for four consecutive years. The program wrapped up in late June, capped by a closing ceremony and awarding of certificates.

“The professors are fantastic,” said He Li, an intermediate court judge in the city of Kunming in southwestern China. “All three were extremely knowledgeable and accessible. Professor Liebman’s understanding of Chinese law and culture makes it easy for him to explain U.S. tort law in a clear fashion.”

While in prior years a teaching assistant would conduct review sessions for program participants in Mandarin, their classes are now conducted exclusively in English.

Liebman, who met with Vice President Joe Biden and senior Obama administration officials this past February to discuss human rights and legal reforms in China, said the participants in this year’s program have the potential to become leaders in China’s judicial system.

“They come from across China—not just the major coastal cities—and displayed impressive analytic skills,” Liebman said. “They are likely to become leading judges in the Chinese court system over the years to come.”

Judges in China assume the bench at a much younger age than their U.S. counterparts, and many of them have never worked as lawyers or law professors. They qualify to enter the judiciary after earning university degrees and passing a judicial exam and a civil-service exam administered by the court system. Almost all of the participants in the 2012 program are in their 20s and 30s.

During a morning session earlier this month, the group listened intently as Greene delivered a lecture on the constitutional implications of landmark Supreme Court decisions such as Marbury v. Madison, McCulloch v. Maryland, and United States v. Nixon. Several of the judges and law students scrolled through the U.S. Constitution on their iPads searching for the relevant sections and articles as Greene spoke.

Greene drew his biggest laugh of the morning when it came time to discuss United States v. Nixon, a key Supreme Court ruling during the Watergate era that helped scuttle Richard Nixon’s presidency.

“Without Richard Nixon, you’re not taking this class,” Greene said, referring to the former president’s historic role in paving the way for the normalization of U.S.-Chinese relations. “But Richard Nixon had some problems.”

The methods of teaching law in China differ significantly from those at U.S. law schools, but the judges adapted quickly to the American style, Liebman noted. “There is much more back and forth in the classroom in the U.S.,” he said. “Although the Socratic method was relatively novel for the judges, they did a good job of jumping in and debating the cases.”

The group’s coursework was buttressed by visits with sitting judges, including Judge Doris Ling-Cohan of the New York State Supreme Court, who was born to Chinese immigrant parents in New York City, and Judge Felicia Mennin of the New York City Criminal Court. They also met with Dean David M. Schizer, the Lucy G. Moses Professor of Law and the Harvey R. Miller Professor of Law and Economics.

The goals of the Columbia Law School component of the program, Liebman said, include giving the judges a basic introduction to the American legal system functions—including some of the challenges it currently faces—as well as introducing them to how legal problems are analyzed in the United States.

“We can’t possibly cover everything, but the combination of classes, court visits, and meetings with judges helps them to gain insight into our legal system,” Liebman said. “The Chinese visitors are working in a very different environment from that of American judges, but there is nevertheless much to be learned from such exchanges.”