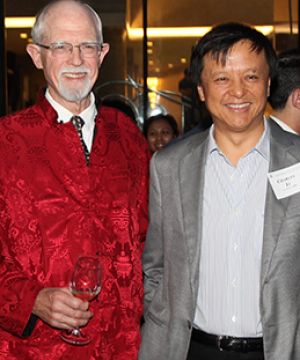 More than 40 years ago, when Professor R. Randle “Randy” Edwards began teaching the law of China at Columbia Law School, few could have foreseen the remarkable influence of his work. In addition to producing outstanding scholarship, mentoring generations of practitioners and academics, and fostering important scholarly exchanges between China and the United States, Edwards founded Columbia Law School’s now world-renowned Center for Chinese Legal Studies, the first organization of its kind at an American law school.

Alumni, colleagues, and friends joined Edwards, the Walter Gellhorn Professor Emeritus of Law, at the St. Regis Hotel in Beijing on May 16 for a special gathering to celebrate two significant milestones: Edwards’ 80th birthday and the center’s 30th anniversary. Benjamin L. Liebman, the Robert L. Lieff Professor of Law and director of the center, moderated the evening.

“It would be impossible to overstate the impact Randy had on both U.S.-China legal cooperation and on training American and Chinese students,” Liebman said. “His legacy is most visible today in the leading positions his students play around the world – and in their continued dedication to his mission of both helping to strengthen the Chinese legal system and of increasing understanding about China in the United States.”

Attendees, including Columbia University Trustee Charles Xiaojia Li ’91 and Professor Edwards' sons Lee Edwards '92 and Jon S. Edwards '95, traveled from as far afield as Jakarta, Taiwan, and the United States to take part in the celebration and toast Edwards’ career and friendship. At the event, they learned about the new Professor R. Randle Edwards Fund for the Center for Chinese Legal Studies, which will create an endowment to provide permanent support for the center’s work, including faculty and student research, conferences, and student fellowships. Guests had the opportunity to sign a book for Edwards that Clinical Professor of Law Alexandra Carter ’03, one of Edwards’ many accomplished former students, presented to the guest of honor.

In the late 1970s, as China began a range of reforms following the death of Mao Zedong, Edwards developed the Program in American Law Scholars (PALS), which revived and expanded Columbia Law School’s tradition of rich scholarly exchange with the Chinese legal community. From 1983 to 1991, he also chaired the Committee for Legal Education Exchange with China (CLEEC), a program often recognized as the most important legal education exchange between China and the United States in the wake of the 1979 restoration of diplomatic relations between the two nations.

Edwards led the Center for Chinese Legal Studies from 1983 until his retirement in 2002, when Liebman took the reins. The center today is the focal point for China-related curricular, extracurricular, and exchange activity at Columbia Law School and hosts one of the largest concentrations of students and scholars studying Chinese law outside of Asia.

Click here to view more photos from the evening.
To make a gift in honor of Professor Edwards, click below and select OTHER in the designation drop down menu. Please direct your gift to The R. Randall Edwards Fund in the comments field.
Make a Gift