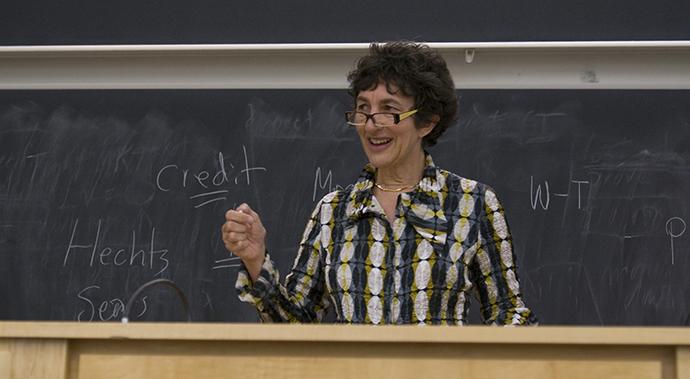 Professor Carol Sanger just added to her already long list of honors and accolades. She was recently elected an honorary fellow of Mansfield College at the University of Oxford, in recognition of her “world-renowned scholarship in the common law of contract, women’s rights, and research in human rights law.”

No stranger to Oxford, she has served as a visiting professor and visiting research fellow at a number of the university’s constituent colleges. While spending the trinity (spring) semester at Mansfield College as a senior research fellow in 2015, Sanger delivered an address titled, “Father and Fetuses: What Would Men Do?” She later turned this subject into a chapter of a new book, About Abortion: Terminating Pregnancy in 21st Century America. Published by Harvard University Press in March, the book digs into the history of abortion law, politics, and medicine, as well as the greatest threats to women’s reproductive rights today.

As an honorary fellow of Mansfield College—renowned for its commitment to human rights and civil liberties—Sanger joins a distinguished group of global leaders in a range of fields beyond the legal academy, including economics, politics, geography, and theology. Mansfield College Principal Baroness Helena Kennedy QC emphasized the strong connection between Sanger’s scholarship and the college’s human rights work.

Sanger joined the Law School faculty in 1996. Over the course of her career she has earned numerous awards and honors for innovative scholarship and for exemplary teaching.

In 2013, she received the Green Bag Award for exemplary legal writing for the article, “‘The Birth of Death’: Stillborn Birth Certificates and the Problem for Law” (California Law Review, 2012). Two years earlier, the Center for Reproductive Rights, a legal advocacy organization, presented Sanger with its Innovations in Scholarship Award. Closer to home, Sanger was awarded the Willis L.M. Reese Prize for Excellence in Teaching by the Law School’s 2007 graduating class, and, in 2001, she was named a recipient of Columbia University’s Presidential Award for Outstanding Teaching.