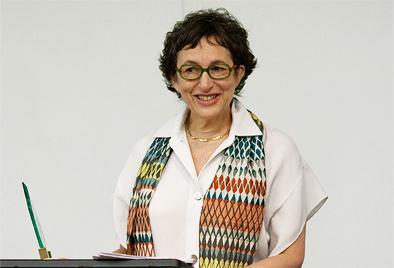 Sanger (above) was honored for her scholarship of abortion law and accepted the award from CRR’s Diana Hortsch during an event titled “Visualizing the Fetus: Implications of Mandatory Ultrasound Laws.” The Nov. 10 event was co-sponsored by the CRR and Law Students for Reproductive Rights, and held at the University of Texas School of Law.

As the author of the article “Seeing and Believing: Mandatory Ultrasound and the Path to a Protected Choice,” Sanger shared her scholarly insights and deliberations on the legal significance and implications of mandatory ultrasound laws and the importance of the visualization of the fetus in abortion law. She was joined in discussion by a panel of fellow women’s rights advocates, including University of Texas Vice Provost Gretchen Ritter, state representative Donna Howard, and legislative counsel at NARAL Pro-choice Texas Blake Rocap.

Sanger is one of the most respected legal minds in the field of family law, and regularly teaches the basic course as well as advanced interdisciplinary courses such as Meanings of Motherhood: Legal and Historical Perspectives and Abortion: Law in Context. Sanger is also the lead editor of the Farnsworth, Young, Sanger, Brooks and Cohen Contracts casebook. She was named teacher of the year by the Law School’s graduating class of 2007, and received the Columbia University Presidential Teaching Prize in 2001.