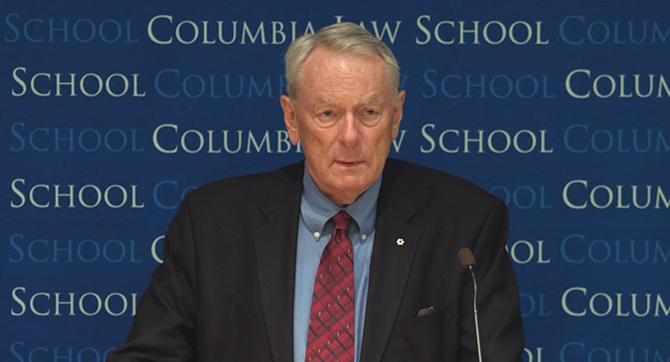 The 2016 Olympics in Rio de Janeiro were filled with stories of glory, patriotism, vindication, and sportsmanship. But even the most casual fan couldn’t help viewing these games in the context of the sports world’s most recent doping scandal: the revelation that Russia has been running a state-sponsored athlete-doping system for years.

Richard Pound, founding president of the World Anti-Doping Agency (WADA), addressed this scandal with students and administrators on Sept. 13 during an event hosted by Columbia Law School’s Center for the Advancement of Public Integrity. A former Olympic athlete, Pound chaired the WADA committee investigating allegations that Russia was violating the World Anti-Doping Code.

Pound took students though an anatomy of an investigation, from whistleblowers’ initial attempts to pass along evidence to the July release of the “Independent McLaren Investigation Report,” the official findings of the WADA investigation. In the report, the commission established that Russia’s sports ministry “directed, controlled and oversaw” a systematic cover-up that ensured positive drug tests were not reported and the country’s athletes were protected from drug testing.

In the wake of the McLaren report’s release, the International Olympic Committee (IOC) asked each sport’s international governing body to determine which Russian athletes were eligible to compete in the 2016 Olympics. Pound, a former vice president of the IOC, spoke candidly to students about his disagreement with that decision.

“The IOC missed a great opportunity,” he said, noting he had hoped the organization would invoke a ban on the entire Russian Federation. “No matter who you are, no matter how important the sport in the Olympic context—whether a fabulous race or the number one event in the games—you cheat, you’re toast.”

Pound’s visit to the Law School was fortuitously timed. Earlier in the day, a group of cyber hackers—reportedly from Russia—had released the health records of American athletes, including tennis player Serena Williams and gymnast Simone Biles, in an attempt to show that America was culpable in a doping scandal of its own (it was later determined that the athletes in question had followed international rules). The hackers had received these records by breaking into WADA’s databases.

T.J. Quinn, an investigative reporter in ESPN’s Enterprise Unit who later joined Pound in his discussion, made parallels to Russia’s reported involvement in this hack and accusations of the country’s involvement in hacks focused on the U.S. government and the current presidential race.

“This has become very much a Cold War proxy,” he said. “When there are accusations against Russia, the response over there is huge.”

Quinn, an adjunct professor at Columbia Journalism School who has covered doping allegations in sports for years—from the Olympics to Major League Baseball—noted that Russian officials see the doping charges as a Western attempt to denigrate their country. “We haven’t seen the full fallout yet,” he added. “I’m sure it’s embarrassing for the athletes involved.”

The Center for the Advancement of Public Integrity, a program that works to improve the capacity of public offices and practitioners to combat corruption, hosted Pound’s chat in conjunction with the seminar Fighting Corruption in Sports. The course, which is co-taught by the center’s Executive Director Jennifer G. Rodgers and Petros C. Mavroidis, the Edwin B. Parker Professor of Foreign & Comparative Law, focuses on core issues in sports corruption, comparing sports organizations to other areas of governance that have dealt with some of the same issues. After the public discussion, Pound and Quinn met with members of the class to delve deeper into these issues.

You can view more of the event, sponsored by Paul, Weiss, Rifkind, Wharton & Garrison, here.