After the U.K.’s historic Brexit vote in June, heads of state who would erect new walls in place of those the EU tore down need to better educate their citizenry on the consequences of the split, said Armando Varricchio, Italian ambassador to the United States, during a Sept. 15 Columbia Law School conference titled “The Future of Integration in Europe and Beyond.”

Varricchio and other international policymakers, scholars, and practitioners convened at a major conference organized by Columbia Law School to grapple with the fallout from and the future implications of Brexit. Columbia Law School Professors Katharina Pistor, (right) director of the Center on Global Legal Transformation, and Anu Bradford, (left) director of the Center for European Legal Studies, initially planned the event months before the U.K. referendum took place. 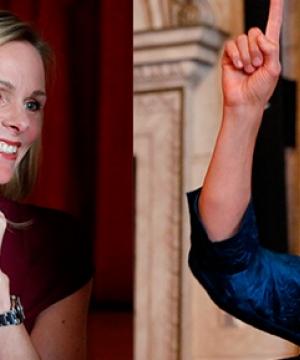 The conference marked the first in the Law School’s new Global Forum series, which aims to examine and find solutions for the world’s most vexing legal issues.

“Even today, there’s a difficult and complex conversation about the meaning and consequences of globalization, including the values we will define for ourselves as a global community,” Gillian Lester, Columbia Law School Dean and the Lucy G. Moses Professor of Law said during her welcoming remarks. She urged the audience to harness the benefits of integration without sacrificing their core values.

The main problem currently facing Europe is a “fundamental democracy deficit” that inevitably fuels alienation, according to NYU Law Professor Joseph Weiler. People believe their voices are not heard or represented in Brussels, and thus stop voting, he said.

“I do feel better as a British person that we’re going to leave Europe because of a democratic deficit and then take control of ourselves with our monarchy and House of Lords,” Authers said, sarcastically. “There's a certain cognitive dissonance if we were worried about the EU's democracy deficit.”

“Brexit is bad for the U.K., it’s bad for Europe, and it’s bad for the world,” concluded Oxford University Professor Sir John Vickers, punctuating the feelings of his fellow participants in the day’s opening panel.

The Political Challenges of Economic Integration

Following World War II, Europe sought to create interdependent trade relationships to avoid future wars. However, these alliances are now the source of contention, said Mark Leonard, director for the European Council on Foreign Relations, who spoke as part of the second panel.

Complicating matters, new global challenges, such as the Ukraine crisis, can only be solved through joint mechanisms, which will increase rather than decrease interdependencies.

The Prospect of Disintegration and the Future of Global Business

The day’s final panel highlighted the difficulties of disentangling the financial sector from its interdependency with the EU.

However, such privileges are only granted full EU members, and London can expect to face more demanding labor law, panelists said.

The U.K. faces major costs to its core financial business if it can no longer freely export its services to the EU, agreed Christopher Bates, a partner with Clifford Chance in London, and Leonard Ng, a partner with Sidley in London. Kristen Silverberg, an ambassador for the Institute of International Finance, also participated in the panel, moderated by Columbia Law School Lecturer Edward Greene.

The conference was held in association with the Italian Academy for Advanced Studies in America.