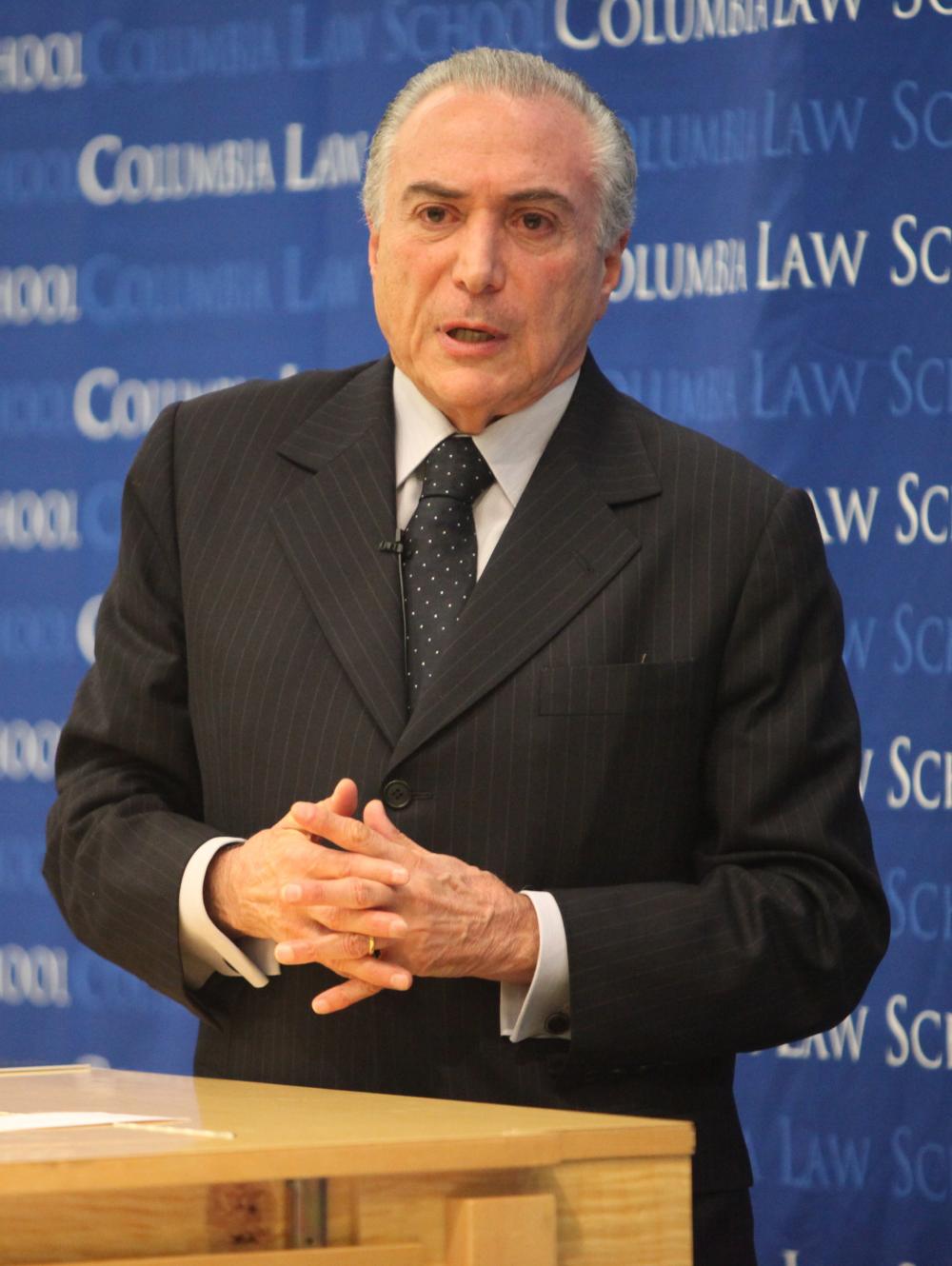 New York, Jan. 5, 2012—At first glance, there was nothing unusual about the veteran law professor delivering a lecture on the history of “Constitutionalism and Democracy” to an audience at Columbia Law School earlier this month. Except that the class was in Portuguese, and the lecturer was the vice president of Brazil.
Michel Temer became vice president of Brazil one year ago, after a long career as a lawyer and law professor. He taught constitutional law in São Paulo, Brazil for more than 35 years and was a member of the 1988 National Constituent Assembly that drafted the current constitution of Brazil.
His visit to the Law School last month was co-sponsored by the Columbia Latin American Business Law Association, the University’s Center for Brazilian Studies, and the School of International and Public Affairs’ BRICLab (a center established to study the rise of the emerging economies of Brazil, Russia, India, and China), with the support of Fórum das Américas (a Brazil-based think-tank focusing on Hemispheric Dialogue). Temer was in New York to participate in BRICLab’s inaugural conference on December 2.
With a growing middle class, huge untapped offshore oil reserves, and an economy that recently passed that of Italy to become the seventh largest in the world, Brazil is a rising player on the world stage. According to Temer, social policies written into the Brazilian Constitution have played an important part in chipping away at the gaping inequality that has long plagued the country.
The vice president began by noting that he would rather teach a class than offer up a speech. Temer then slipped easily into the professorial role, providing some international historical context related to the topic—from tribal to absolutist societies, to the emergence of liberal states with a focus on individual rights, to states like Brazil that have economic and social rights written into their constitutions.
Temer explained that Brazil’s post-dictatorship constitution contains many provisions dedicated to these social rights. Although many other countries include rights such as food and dignity in their legal norms, such norms are often ignored. “Some governments don’t care,” said Temer. But, he explained, for the past 10 to 12 years the Brazilian government has tried to comply with the law, providing funding and housing to needy families. During that period, 30 to 40 million people have been removed from the poverty rolls, he said. “These people are integrated into the middle class.”
The Brazilian Constitution also enshrines all individual rights, said Temer. “But we add the social state,” he added. “Democracy ruled by freedom of the press, information, and property is not enough; what is also needed is what’s called the ‘democracy of food on the table.’”
Special guests in attendance for Temer’s lecture included the consul general of Brazil in New York, Ambassador Luiz Felipe Seixas Corrêa, the permanent representative of Brazil to the United Nations, Ambassador Maria Luiza Ribeiro Viotti and the president of Fórum das Américas and chairman of Brasilinvest, Brazil’s premier merchant bank, Mario Garnero.
Professor Thomas J. Trebat, executive director of the Institute of Latin American Studies and of the Institute’s Center for Brazilian Studies, said that Temer’s visit “underlined the ties between Columbia University and Brazil” and was a big step forward in raising the profile of Columbia’s global center, which is scheduled to open in mid-2012 in Rio de Janeiro, Brazil.
David M. Schizer, Dean and the Lucy G. Moses Professor of Law, introduced the vice president and met with him privately prior to his lecture. During their conversation, Temer told Schizer: “I always dreamed of teaching a class at Columbia, and the fact that I have been given this opportunity constitutes my highest academic achievement.”
Written by Audrey H. Baker.