Bolton Warns U.S. Needs To Stay Vigilant About Iran Nuke Program
Former UN Ambassador John Bolton Decries State Dept. Report on Iran
Says threat of nuclear weapons in the wrong hands worldwide  is major concern
By MIRIAM FURMAN
February 7, 2008 (NEW YORK) - John Bolton, former U.S. ambassador to the United Nations, questioned a recent State Department national intelligence estimate (NIE) that minimized Iran’s nuclear weapons program and criticized  “the mindset of State Department bureaucrats who advance their own priorities, not the president’s.” Bolton made the remarks in a speech to the Federalist Society today during a visit to Columbia Law School.
Although Bolton said the Director of National Intelligence later essentially reversed himself, the debacle “leaves Iran freer to develop nuclear capability and tanks the possibility that the Bush administration will take action against Iran.” He doesn’t foresee the UN Security Council taking action either. 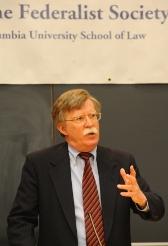 “If Americans knew how foreign policy was made, they’d be after us with pitchforks,” said Bolton, the former U.S. Ambassador to the U.N. in the Bush Administration and now a senior fellow at American Enterprise Institute.
The world’s inability to curb nuclear proliferation opens the door for terrorist nations or groups such as the Taliban to use weapons of mass destruction, Bolton warned.
Only the United States will be able to stop Iran from developing nuclear weapons and North Korea from expanding its program, he predicted.  The U.S. must also get tough with China so it will apply pressure on North Korea, he said.
Bolton criticized the State Department’s negotiations with North Korea for what he described as a failure “to see whether North Korea is giving up its nuclear weapons program.”
“The 2008 election is consequential from a national security view,” he said. “The North Koreans think they’ll get a more compliant administration after next year.”
Bolton said the U.S. “needs a president who can manage government bureaucracy. After 20 years of nuclear weapons sales to Middle Eastern states that sponsor terror, “North Korea should not be taken off the list of terrorist nations,” he said. He accused the State Department of pushing to de-list North Korea.

Former U.S. Ambassador to the UN John Bolton (second from right); poses with Professor Philip Hamburger (far right), faculty advisor to the Federalist Society; and students (from left) Cory Buland; Nate Berry, Federalist Society president; and Olga Kaplan. (Photo Credit: Eileen Barroso)
Israel’s September 6 air strike inside Syria indicates that Syria is developing nuclear weapons, in Bolton’s view. “Israel wouldn’t have undertaken the raid unless it saw serious risk,” he said. “We don’t know if the facility attacked was a clone of North Korea’s reactor or some kind of joint venture.”
Limiting access to financial markets for countries that refuse to give up their weapons of mass destruction is an especially effective way to control the arms race, Bolton said. “It’s surprising that after our experience with the drug wars, it’s taken us so long to figure this out.”
After the program, Bolton signed copies of his new book, Surrender Is Not an Option: Defending America at the United Nations and Abroad, published in November.