The Utah Democrat readies himself to help fix a “broken” government, calling on lessons from Columbia’s classrooms and community.

Ben McAdams ’03 earned an A-plus in Legislation and Regulation at Columbia Law. Perhaps that was equal parts preparation and foreshadowing, because on Jan. 3 he was sworn in as a member of the U.S. House of Representatives, representing Utah’s 4th District.

“Going to a law school where the student body and the city are among the most diverse places in the world, finding that there is common ground, and developing those close personal friendships in a 1L study group or a finals group, you can learn from people who have different life experiences and perspectives,” he says. “That’s something Columbia taught me . . . that I think will have value in the divided Congress as well.”

McAdams, a Democrat and two-term mayor of Salt Lake County in a Republican-dominated state, defeated incumbent Rep. Mia Love, the only black female Republican in Congress at the time, after a tough, often personal campaign. Counting the vote took two weeks; in the end McAdams had 50.13 percent of the vote—just 694 more than Love.

Though he is entering Congress at a time when national politics are deeply divided, McAdams remains convinced that bipartisanship is possible. “I’ve never been in the majority,’’ he says. “My entire career has been spent learning to listen and to work across party lines.” McAdams recalls his alliance with Rep. Greg Hughes, the Republican speaker of the Utah state legislature, working on issues including homelessness and the opioid crisis. “He sees things that I don’t see, I see things that he doesn’t see," he says. “We stay at the table long enough that we find common ground. Our solutions are better because we talk to each other.”

Columbia experience “at the heart” of McAdams’ success

McAdams’ time in New York City marked a deliberate venture away from Utah, where his roots go back to family that arrived with Mormon pioneer Brigham Young in 1847. Raised in the suburbs of Salt Lake City—his mother was a school teacher and his father an often-unemployed car salesman—he worked his way through the University of Utah. McAdams and his wife, Julie, who also earned a law degree from Columbia, in 2002, married in college and sought out Columbia precisely because of its diversity and global perspective.

“To be right in the heart of New York City was an exciting opportunity. It was going to be very different than living in Utah,” McAdams says. “We loved it.” The couple’s apartment at 122nd and Amsterdam measured 375 square feet, “about what I’ll be living in in Washington.”

Once he took office in Utah, McAdams was surprised to find that his training in corporate law influenced his approach to policy making: “Understanding the power of markets, given proper incentives and direction, to tackle some of humanity’s toughest challenges is something I learned at Columbia and have integrated into my public service,” McAdams says.

As a result, in 2013, Salt Lake County became the first U.S. government to launch a public-private venture known as a “social impact bond” for a preschool program. Goldman Sachs funded the program, and the county agreed to reimburse the cost with interest if the program met specified goals. Also known as “pay for success,” social impact bonds remain an emerging form of government financing. But Salt Lake County determined the program had succeeded in reducing the number of students who needed special education classes.

“The experience I got at Columbia Law School was defining to the approaches I’ve taken in public service. It’s been at the heart of my ability to succeed in public service in Utah, and I look forward to taking that same philosophy to Congress,” he says.

McAdams’ desire to enter public service was sparked at age 19 by his experience as a missionary for the Church of Jesus Christ of Latter-day Saints in poor areas of Brazil—where he saw the “huge” difference that access to education provided in climbing out of poverty—and fanned by volunteer work on local and national Democratic campaigns. But when he graduated from Columbia as a Harlan Fiske Scholar, McAdams first heeded some advice from Adjunct Professor James Tierney, a former state attorney general.

After paying down student loans during four years of work at Davis, Polk & Wardwell, McAdams moved back to Utah in 2007 and began teaching securities law at the University of Utah S.J. Quinney College of Law. He entered politics in 2009, serving four years in the Utah State Senate, and, in 2012, successfully ran for mayor of Salt Lake County. Julie McAdams is now associate general counsel at the University of Utah; she and the couple’s four children—twins James and Kate, age 13, Robert, 10, and Isaac, 7—will stay in Utah while McAdams commutes to Capitol Hill. 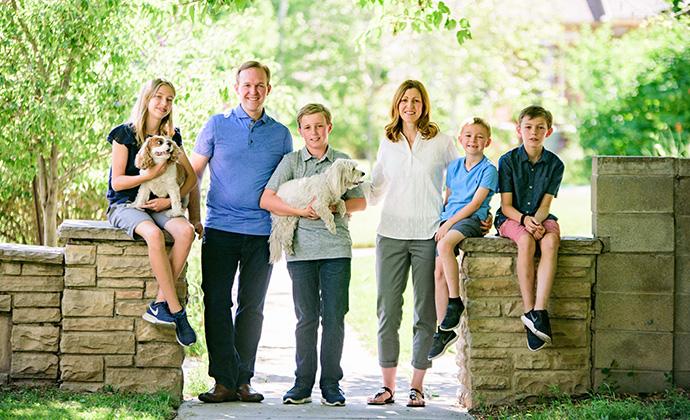 As senior adviser for Salt Lake County Mayor Ralph Becker, McAdams championed an LGBT non-discrimination ordinance; as mayor, he lived on the street for three days to investigate problems with sheltering the homeless. In Congress, he says, his legislative priorities will be preserving the Affordable Care Act and settling the status of undocumented immigrants who arrived in the United States as children under the Deferred Action for Childhood Arrivals (DACA) program.

These priorities put him largely in line with the rest of his party. It turns out, though, that McAdams’ experience working across the aisle also could be of use among fellow Democrats: He’s a Blue Dog Democrat—fiscally conservative, centrist, and hawkish—outnumbered in his own party by progressives. Like other Democratic candidates in competitive races, he vowed not to vote for Nancy Pelosi as speaker. (He voted for Florida Rep. Stephanie Murphy, leader of the Blue Dog Coalition.) But McAdams, who described President Donald Trump as “not an honest person” during his campaign, supports Democrats’ plans to initiate more investigations of his administration.

“Congress has an important oversight role in government, regardless of who the president is,” he says. “There are a lot of concerns that are raised with some of the things that we’ve seen out of the Trump administration,’’ he says. “Every day on the news we see new things that are troubling. As a country we are crossing political bridges that we thought we would never cross. And it’s disturbing. Outside of the president, we’ve sunk to political lows that I never thought possible.”

That’s one reason McAdams wanted to run for Congress. He jokes that the high grade he earned in Legislation and Regulation “may not do me much good in Congress,” but he ran on the premise that voters are fed up with a “broken” government and that he would do his part to fix it. “Washington isn’t going to heal itself,” he says. “I think this is an important time for people to step forward who love this country and care about this country, and are ready to give back in service to country above self.”