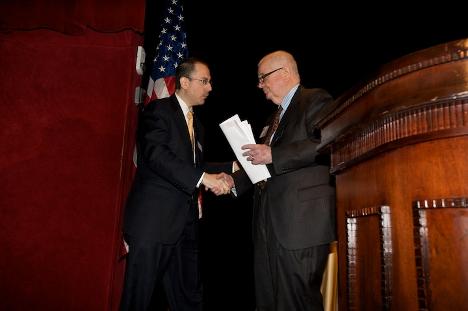 Media Contact:
Public Affairs Office 212-854-2650 [email protected]
New York, Feb. 5, 2010—Attorney General Eric Holder ’76 and Henry Monaghan, the Harlan Fiske Stone Professor of Constitutional Law, were awarded Friday the Medal for Excellence from Columbia Law School.
The medals were given at the Law School’s Winter Luncheon at the Waldorf=Astoria. However, Holder was not able to attend because of a storm that could hit Washington with more than two feet of snow. David M. Schizer, Dean and the Lucy G. Moses Professor of Law, conveyed Holder’s regrets.
Columbia University President Lee Bollinger ’71 lauded Holder for his long career in public service, including 12 years as a lawyer in the U.S. Justice Department, a judge in the District of Columbia, and Deputy Attorney General in the Clinton administration.
“Has there ever been an attorney general given more controversies to solve and a department more in need of leadership and respect?” Bollinger said.
Bollinger praised President Obama and Holder, who attended the Law School after graduating from Columbia College in 1973, for not sacrificing constitutional rights to fight crime and terrorism.
“It’s a hard path to live by our principles, to protect speech that offend and threaten us; to give rights to those who commit crimes and do us harm, to reject the lawless brutality we know our enemies do not hesitate to employ,” Bollinger said.
“In Eric Holder, we have an Attorney General of the United States who is not afraid of the hard, principled path to the pursuit of justice, the defense of our security, and the fulfillment of our founding ideals.”
Monaghan, long one of the nation’s leading constitutional scholars and top experts on federal jurisdiction, said the 27 years that have spanned his tenure at the Law School have been the “happiest years of my life.”
“I love the school,” Monaghan said. “I go to the office every day and I have always loved that experience.”
Monaghan said he took a “special delight” in working with younger faculty members.
“We have been enormously successful in recruiting younger faculty, each one of whom is very special, and each of whom contributes to the life of the Law School,” Monaghan said. “At the entry level—with young people seeking their first appointment—we have been almost unbeatable.”
Even in a time of tightened budgets and increased anxiety among students about getting a job, Monaghan said the Law School remained a vital institution.
“The Law School is at its strongest point in my tenure,” Monaghan said. “I believe it is at the strongest point in its history.”
The Medal for Excellence is presented annually to an alumnus or past or present faculty member who exemplifies the qualities of character, intellect, and social and professional responsibility the Law School seeks to instill in its graduates.
For more pictures of the event, click here.
To read Bollinger's remarks, click here.
To read Monaghan's remarks, click here.
Columbia Law School, founded in 1858, stands at the forefront of legal education and of the law in a global society. Columbia Law School joins its traditional strengths in international and comparative law, constitutional law, administrative law, business law and human rights law with pioneering work in the areas of intellectual property, digital technology, sexuality and gender, criminal, national security, and environmental law.
Visit us at http://www.law.columbia.edu
Follow us on Twitter http://www.twitter.com/columbialaw