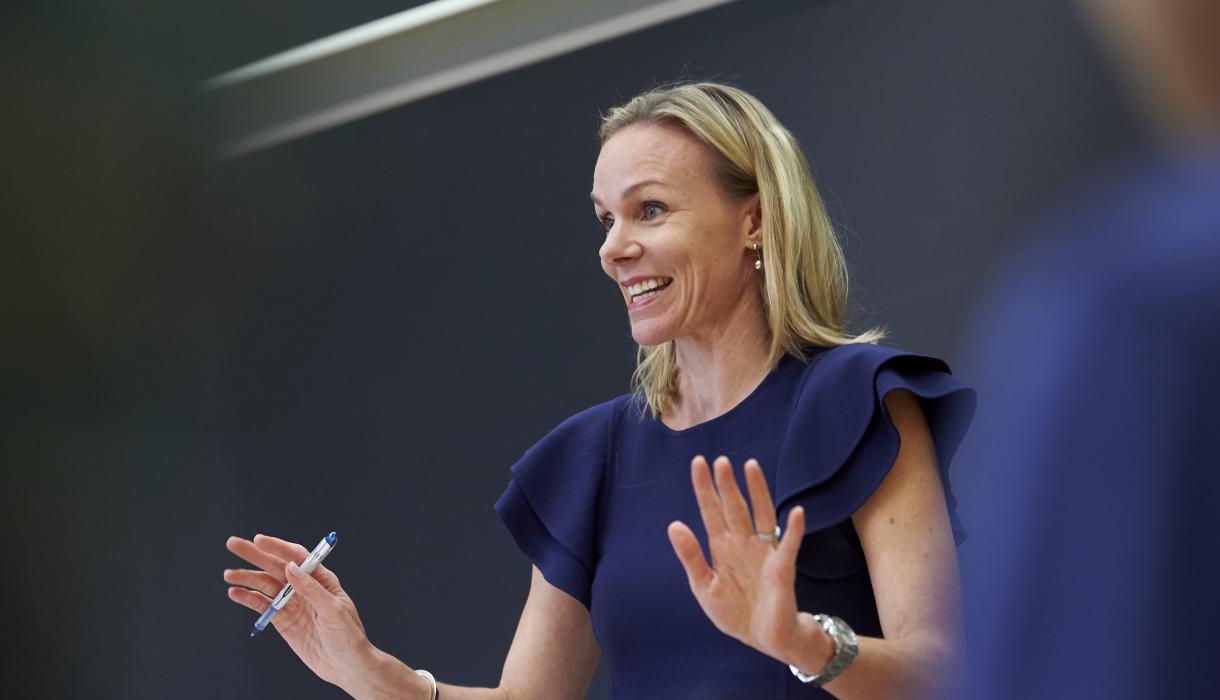 Although she is a citizen of both the United States and her native Finland, Columbia Law Professor Anu Bradford often describes herself as “a proud European.” It’s an identity that reflects her transnational outlook, her personal story, and her expertise as a leading scholar of the European Union (EU).

In her important new book, The Brussels Effect: How the European Union Rules the World, Bradford asserts through her original analysis that EU policies and regulations have an outsize global and economic impact in areas such as data privacy, antitrust, environmental protection, online hate speech, and consumer health and safety. In order to trade with or operate within the EU, foreign companies must heed EU standards, a practice that is the essence and power of the “Brussels Effect,” a term she coined in 2012.

“EU laws determine how timber is harvested in Indonesia, how honey is produced in Brazil, what pesticides cocoa farmers use in Cameroon, what equipment is installed in dairy factories in China, what chemicals are incorporated into plastic toys in Japan, as well as how much privacy is afforded to internet users in Latin America,” Bradford writes.

The book, which was published in the U.S. and Europe in February, has been getting rave reviews on both sides of the Atlantic. In Foreign Affairs, Princeton professor Andrew Moravcsik wrote: “This may well be the single most important book on Europe’s global influence to appear in a decade.” And Financial Times Brussels correspondent Alan Beattie said the book “will be the definitive reference guide for those wishing to understand” how the EU dominates global regulation. 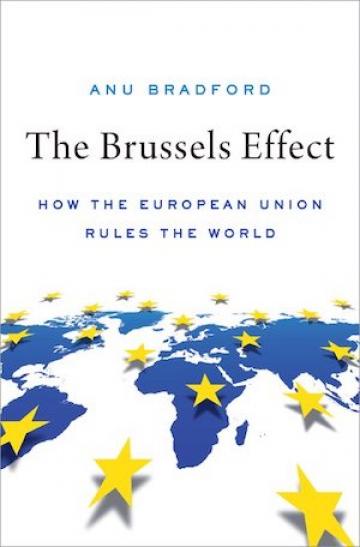 A Dual Point of View
“I am able to look at the EU as both an outsider and as an insider,” says Bradford, who has lived in the United States for the past 15 years. In an interview in her Columbia Law School office on the day that the United Kingdom formally left the EU (“I’m very sad. It’s a tragic policy blunder.”), Bradford explained her unique perspective: “I am connected to Europe personally, culturally, and professionally. To me, EU law is domestic law, not foreign law. But since I’m not in the Brussels bubble, I get the benefit of a perspective that comes from distance.”

Bradford’s scholarship is informed by her transnational legal education (she earned degrees from the University of Helsinki and Harvard Law School) and professional experience. She worked at the Parliament of Finland, the European Parliament, and the Brussels office of the law firm Cleary Gottlieb Steen & Hamilton before launching her academic career in 2008 at the University of Chicago Law School. Since 2012, she has been the Henry L. Moses Professor of Law and International Organization at Columbia Law School and director of its European Legal Studies Center. (She is also a senior scholar at Columbia Business School’s Jerome A. Chazen Institute for Global Business.)

Growing up with the EU’s open borders had a profound influence on her worldview. “I’ve benefited greatly from the freedom of movement,” she says. “I studied in France and Germany. I am part of the first generation of Europeans that has really made the most of studying abroad and having friends in different places and a diversity of experiences that have tremendously enriched our lives.”

A Values Proposition
EU regulations and policies, Bradford explains, have complementary economic and social goals. “By removing regulatory disharmony and divergence across member states, we are facilitating trade and building a single market,” she says. “When you harmonize environmental regulations, for example, you are furthering trade but at the same time promoting values about a cleaner environment, which are both important to Europeans. There is always this dual purpose. Values are a huge factor, for instance, when it comes to data privacy.”

“That’s a long conversation,” says Bradford, who nonetheless offers a concise and powerful explanation. “By infringing on personal privacy, that’s how Nazis identified Jews. That’s how in East Germany there was massive surveillance of individual citizens because the Stasi was misappropriating personal data. So history has taught Europeans the value of privacy, which is why it is a fundamental right in the EU.”

While Bradford emphasizes that not all values are shared among EU countries—for instance, she’s concerned that the rule of law is backsliding in Hungary and Poland—she doesn’t envision other nations wanting to leave the EU in the foreseeable future. “I don’t think any countries are looking at what the U.K. is doing and wishing they were the U.K.,” she says of Brexit, adding that most U.K. businesses will by necessity continue to observe EU standards since 45% of their exports are to Europe. “The U.K. had an important voice on discussions about regulations that provided a certain balance between the markets and the government. That voice will now be lost. There are no winners from Brexit. That’s the thing that makes it particularly tragic.”

The analytical framework that Bradford developed in The Brussels Effect can be applied to more than understanding the dominance of the EU. “What would it take for us to see a Washington Effect, a Beijing Effect?” she says. “So even though I show that currently only the EU has such global regulatory power, the book is in theory generally about when and how a single jurisdiction can rule the world."

The Best of All Worlds
In the spring of 2019, Bradford took a sabbatical from the Law School, moving with her family to Spain for six months so she could finish writing The Brussels Effect on European soil. She and her husband, Travis Bradford—who is American and an adjunct professor at Columbia’s School of International and Public Affairs, the Business School, and the Earth Institute—have three children: Vivian, 4, Sylvia, 9, and Oliver, 13. (The couple met in Brussels shortly before they both, coincidentally, headed to Harvard. Bradford calls their meeting “the biggest Brussels Effect on my life.”)

The sabbatical was also for the benefit of their children. “It was very important for me that the kids, who feel very Finnish and very American, develop a layer of European identity and feel proudly European,” she says. At home, Bradford speaks to her children in Finnish. She chose Spain because she wanted them to learn another language. “It’s very helpful in the United States to speak Spanish,” says Bradford, who also speaks French, German, and Swedish. “We were able to travel all around Europe. We had a wonderful time.”

Despite the importance of Europe to her, Bradford says Columbia Law School is her ideal intellectual home, and she relishes training the next generation of international lawyers. “There’s no better place for me to do research than Columbia Law School, and I would not trade it for anything,” she says. “Students and faculty here think big, dream big, and see the world as full of opportunities. I love the diversity of our student body and the diversity of the country, which allows for rich conversations that have made me a better professor."

Bradford has organized for week-long study trips for students to Brussels and Luxembourg where they’ve met with members of the European Parliament and the European Court of Justice as well as practicing attorneys and politicians. Her role as a professor, she says, enables her to have more impact, perhaps, on EU law than if she were a practitioner, judge, or diplomat.

“There are so many aspects of the legal profession I enjoy—but I can’t do it all—so I’ve got the best of all worlds because I can train lawyers who will practice EU law, international law, antitrust law, and trade law in government, corporations, and international institutions,” she says. “If I can impart some wisdom and analytical skills that make them thrive and enjoy these professions, then, indirectly, I’ve had the chance to shape those institutions and the world as well.”