And ... Action: Nina Shaw ’79 Sets the Stage for Reform in Hollywood

For decades the esteemed entertainment lawyer and Medal for Excellence honoree has represented some of the industry’s brightest stars. Now, as a co-founder of Time’s Up, she is shining a light on a dark legacy of sexual harassment and assault. 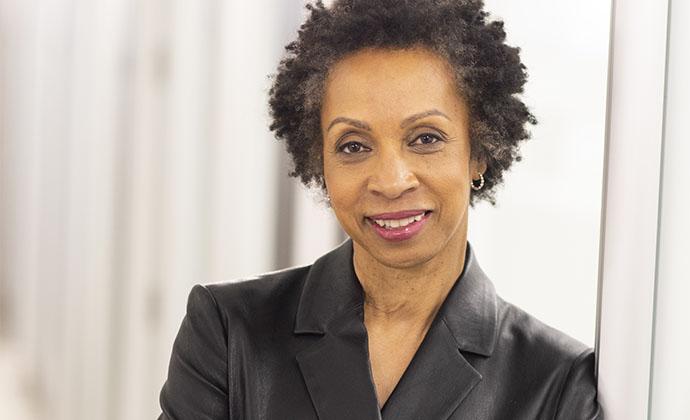 After decades of negotiating blockbuster movie deals for celebrity clients, entertainment lawyer Nina L. Shaw ’79 used her clout last year to help drive a movement. As one of the country’s most sought-after transactional lawyers, representing such acclaimed artists as actor Regina King, singer John Legend, and director Ava DuVernay, Shaw was in prime position to co-found Time’s Up, the entertainment industry’s contribution to the growing #MeToo movement.

Since co-founding the firm Del Shaw Moonves Tanaka Finkelstein & Lezcano in 1989, Shaw­—who will be presented with the Columbia Law School Medal for Excellence on February 22 at Cipriani 42nd Street in New York City with co-honoree Jonathan D. Schiller ’73—has become renowned as not just an acute dealmaker but also a voice for inclusion and diversity in an industry that has long been disproportionately white and male.

Sitting in a conference room in her Los Angeles office, Shaw recalls a seminal speech she gave in 2016, in which she talked about the need to speak up in Hollywood meetings “about why you don’t see people who look like you. Or if you have a woman who represents you, why you don’t ask the owners of that agency, ‘Are women partners? And if not, why not?’”

Her penchant for advocacy and calling out inequity has not let up. In 2017, in response to #MeToo, Shaw—among many others—helped found Time’s Up, an initiative backed by 300 prominent women in entertainment to fight systemic sexual harassment and assault in the workplace.

“It was born out of the outrage that we all felt when we learned about all these abuses. But I think the important thing is that Time’s Up is about turning our rage into action,” Shaw says. The goals Time’s Up leadership has set include achieving gender parity at movie studios, TV networks, and talent agencies and discouraging the use of nondisclosure agreements in harassment cases. This year, a new law has gone into effect in California that bars employers, in cases related to sexual misconduct, from requiring that workers sign these types of agreements as a condition of keeping their job.

What began with a focus solely on Hollywood expanded. Time’s Up quickly raised $22 million to start the Time’s Up Legal Defense Fund to help those who’ve experienced sexual harassment and assault in every industry, especially low-income women and people of color. The fund, which is administered by the National Women’s Law Center Fund and works with more than 800 attorneys nationwide, has helped connect more than 3,400 women and men to legal resources.

Shaw credits her alma mater—which she recently supported with a leadership gift to the law school’s Eric H. Holder Jr. Scholarship Fund—as a place that helped instill in her a commitment to service. “When you look at the history of lawyers who graduated from Columbia, there has been this notion of betterment for the public good. That is a principle that I try every day to espouse,” says Shaw, who has two daughters with her husband, Wallace Little, a retired partner at Ernst & Young.

A native New Yorker, Shaw grew up in Harlem and, she says, has a partly personal reason for supporting the Holder scholarship fund, which aims to support students of color: She met the future attorney general while she was in high school. “My older sister dated his roommate,” recalls Shaw, who majored in political science at Barnard on a combination of scholarships and student loans.

Later, “I attended law school in what, at the time, felt like a big surge for women as we went from single-digit to double-digit percentages of the overall class,” Shaw says. “On reflection, I realize that 20 percent should not have felt like such a big deal, since it pales by comparison with the current enrollment of women. However, I was keenly aware that as a person of color, I would be a minority in the legal profession, and I was determined even then to be the best lawyer possible to honor the legacy of the African-American lawyers who came before me, as well as the excellent tradition of Columbia Law School graduates.”

After law school, she headed west to pursue entertainment law, a direction that puzzled some of her classmates. “It wasn’t as hot a ticket as it is now, especially compared with going to Wall Street or working in the M&A business or getting a clerkship or going into the public-interest area,” Shaw says. When she landed her first job, at the L.A. firm O’Melveny & Meyers, she gave the relocation reimbursement she received to her mother (“It was the year of the fuel crisis, and that money meant her bills would be paid,” Shaw says) and worked a summer job to afford the move.

As passionate as she is about her advocacy work, Shaw emphasizes that she loves the day-in and day-out of transactional law, structuring deals, and negotiating pay. To this day, she is proud that the first film deal she put together, for the 1988 drama Stand and Deliver, went on to garner an Academy Award nomination for its lead actor, Edward James Olmos.

Ten years into her career, she co-founded her own firm—she notes that 50 percent of the employees are women and a quarter are people of color—because she wanted to work at a firm focused on entertainment law. She emphasizes that in Hollywood, thinking purely about numbers isn’t always the best strategy; creative concerns have to be weighed as well. “I think that to be a really good entertainment lawyer, you must make the toughest deal possible in the context of a deal that works.”

In recent years, she has negotiated contracts for the 2014 film Selma and the upcoming miniseries Central Park Five (for her client DuVernay), the 2016 documentary I Am Not Your Negro, and a first-look deal at Showtime for The Chi creator Lena Waithe. Shaw credits part of her success to her innate interest in talking to people: “I met Ava when she was a publicist for clients of mine and Lena when she was a young writer. In fact, my husband and my older girl say, ‘Stop talking to everyone.’ I talk to Uber drivers. I talk to security. I remember reading that you become more understanding of the differences among people the more people you expose yourself to.”

As she continues to speak out on the issues that drive her, Shaw keeps in mind some of her forebears who continue to inspire her. “My great-grandfather began the chapter of the NAACP in his hometown of Charlottesville, Virginia. And a few years ago, I was looking through a book about Charlottesville and saw a picture of my three times great-grandfather, who was born an enslaved person, and he was with a group of ministers meeting with Theodore Roosevelt to talk about lynching in the early 1900s. And I’m thinking, he started this fight more than 100 years ago, and he did not live to see it change,” she says. “I stand on the shoulders of people who did what I do and suffered great consequence, and in some ways in their lifetimes, for very little benefit. When I think about the larger picture of Time’s Up, I think about how lucky I am. In a sense, it’s really a blessing. Who gets to actually advocate for change and to see that change?”