New York, April 17, 2012—Israel is the “ultimate ally” of the United States, with shared values and a shared commitment to democracy, Michael B. Oren, Israel’s Ambassador to the United States told a capacity audience at Columbia Law School. 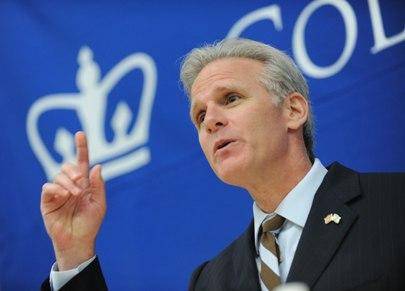 “The relationship with Israel is the most multi-faceted and deepest relationship the U.S. has had with any nation in the post-World War II era,” Oren said, in a talk hosted by the Law School’s Center for Israeli Legal Studies. He noted strong spiritual ties, a strategic alliance, and a commercial connection between the two countries.
The strategic alliance came after Israel “defeated large Soviet-backed armies” in the 1967 Six-Day War, Oren said, and “American policymakers woke up and realized there is a large superpower in the Middle East and we should be allied with that superpower.” In the Six-Day War, he said, Israel did not get a single bullet from the U.S.
The commercial connection is more recent, and growing fast. Oren noted that Israel is the 20th largest customer of the United States, despite its small size, and tens of thousands of Americans work for Israeli companies. Many of the top technology companies in the U.S. have plants in Israel, he said.
“Israel saves American lives on and off the battlefield,” he said. There are Israeli-made components in every American military vehicle, he noted, and a kibbutz in northern Israel created a kit that allows the military to armor-coat its vehicles. An Israeli-made pressure bandage, designed to stop bleeding, is used to save American soldiers; the same one that was also used when Congresswoman Gabrielle Giffords was short in Arizona last year, he added.
Oren spent much of his hour-long talk discussing Israel’s commitment to democracy. Like the U.S., he said, Israel has an independent judiciary, elected representatives, and the rule of law. He noted that a former president was convicted of sexual offenses and condemned to prison by a three-judge panel consisting of two women and an Arab Supreme Court judge.
He spoke of Israel’s “rambunctious” parliament, the Knesset. “In the U.S., when someone yells at the President, it is front-page news,” he said. “When someone in the Knesset yells at the Israeli Prime Minister, it is completely ignored. It happens all the time in our Knesset.” He said Israel is the most liberal country in the support of gay rights and Tel Aviv was recently voted the most gay-friendly city in the world.
Israel has a memorial to John F. Kennedy, a memorial to Martin Luther King, Jr., and a memorial to the victims of the Sept. 11, 2001 terrorist attacks, he said. There also is a Liberty Bell Park in Jerusalem, he added, complete with a replica of the Liberty Bell. “Israel is unabashedly, unequivocally pro-American,” he said, and while he acknowledged some criticism of Israel, he believes pro-Israel sentiment in the U.S. is near an all-time high.
At the end of the session, several students asked Oren about what they described as “anti-Israel propaganda.” He said he appreciated the invitation to speak at the Law School—and at other universities around the country—so that he can hear different opinions. “There is a place for criticism,” he said, if it is “respectful, helpful, and most important, informed criticism.”
Oren was born in the U.S. and studied at Columbia University (CC ’77, SIPA ’78) and Princeton before emigrating to Israel. He was appointed Ambassador to the U.S. in 2009. Oren was introduced by Professor Richard Stone, who described Oren as “a thinker, an academic, a writer, and a national resource.”
The Law School’s Center for Israeli Legal Studies is led by Professor Zohar Goshen, and brings together Israeli scholars for lectures and creates exchange programs and fellowship opportunities for LL.M. and J.S.D. students. Goshen recently served for three years as head of the Israel Securities Authority. Oren’s appearance was made possible by the generous support of Geoffrey Colvin ’77and Marcia Colvin.