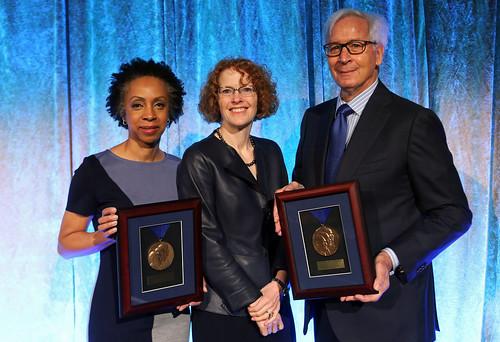 The founding partners of two eminent law firms were honored by the Columbia Law School community at the 70th annual Winter Luncheon on February 22 at Cipriani 42nd Street in New York City.

Gillian Lester, Dean and the Lucy G. Moses Professor of Law, presented the Medal for Excellence to commercial litigator and arbitration lawyer Jonathan D. Schiller CC ’69, LAW ’73 of Boies Schiller Flexner LLP and entertainment lawyer Nina L. Shaw ’79 of Del Shaw Moonves Tanaka Finkelstein & Lezcano. Schiller served as chair of Columbia University’s board of trustees from 2013 to 2018; Shaw is one of the founders of the Time’s Up Legal Defense Fund, which connects those who have experienced sexual misconduct in the workplace with legal and public relations assistance.

Since 1964, the Medal for Excellence has been awarded to alumni and faculty members who exemplify the qualities of character, intellect, and social and professional responsibility that Columbia Law School seeks to instill in its students.

Before 300 alumni, faculty, and friends of the Law School, Dean Lester lauded Schiller and Shaw as leaders who “inspire others by the example of their conduct.” She spoke about the necessity for the next generation of lawyers to develop and hone their leadership skills “to move our society forward” and the Law School’s commitment to teaching leadership as a subject. “When Columbians lead, the world changes for the better,” she said.

Schiller, whose tenure as chair of the university’s board of trustees included the planning and development of Columbia’s groundbreaking new Manhattanville campus and establishing a national model in policies, personnel, and research to address gender-based misconduct on campus, explained how playing for the championship Columbia College basketball team influenced him. “We focused on a shared goal,” he said. “The lessons about teamwork endure, and that is because they produced for me pure joy—pure joy from being in the game, from working with a team together, and all pulling in the same direction, whether in a basketball arena, whether in a war room preparing for trial, or whether in the courtroom itself before a judge or jury.”

Columbia Law School, he said, encouraged him to use his legal training for social justice. He recalled spending his 1L summer in California working with a Cesar Chavez legal team to protect members of the National Farm Workers Association on the picket line and going to court to seek injunctions against their employers to protect their civil rights. “When I returned for my second year, I clearly saw the law as a means to solve problems,” he said. “Columbia has long trained aspiring lawyers, like all of you here, to jump into the arena to make a difference and to be in the game.”

After exhorting the audience to support the Campaign for Columbia Law, he said, “I so appreciate this honor and the opportunity to thank the law school for the teaching and for the opportunities that it provided me and continues to provide so many others.”

In accepting her award, Shaw recalled growing up in Harlem and not knowing any lawyers but reading about lawyers who were “superheroes,” like Thurgood Marshall and Constance Baker Motley ’46, “who flew off the pages of Ebony magazine,” she said. “They changed lives, and they made the world a better place. I thought they should have their own special-edition comic book series, and I half expected a cape to come with my graduation cap and gown.”

Today, Shaw is a Hollywood superhero whose clients include singer John Legend, director Ava DuVernay, and Regina King, who won the 2019 Oscar for Best Supporting Actress. She has made her transactional entertainment law practice a means to advance diversity and inclusion. “So while my work doesn’t quite compare to the giants of jurisprudence—after all, I negotiate the size of personal trailers—I have come to realize that to work on behalf of art and artists matters,” she said. “When an artist can tell the stories that they were born to tell and be fairly compensated regardless of race or gender and do so in a safe work environment, all of our lives are changed.”

Time’s Up has been a way for Shaw to upend “the status quo that had so long institutionalized women as second-class citizens in the entertainment industry and beyond,” she said, adding that because of Time’s Up, “men and women from all over the world have been empowered to protest abuses of power.” She reminded the audience of lawyers, judges, and professors that the Time’s Up movement has a universal message: “None of us are too small for our voices not to be heard, and none of us are too large to not be held accountable.”