What started as a way for Arlene Chow ’98 to “de-stress” from her full-time job has since turned into a second career.

Chow, who grew up drawing and doing craftwork, started making jewelry from glass beads her first year out of college in her downtime as a paralegal in Seattle. Seeing jewelry in store windows, “I thought, ‘I can do that!’ and went and read a slew of books and figured out how,” Chow says. Then, she sold a few pairs of earrings on consignment to stores.
She took a break from jewelry-making as a law student but gravitated back to it when she started private practice in San Francisco.
“My eyes were too tired to read after work, so I started beading again,” Chow recalls. “It felt great to stop being logical and exercise a completely different part of my brain.”
When Chow and husband Thomas Healy ’99, moved to Washington, D.C., Chow — who by now had a large inventory — began taking her part-time jewelry business more seriously.
At this point, she also developed a unique style.
“I stopped looking at other people’s jewelry and started creating my own,” she says.
Her pieces, made from sterling silver and semi-precious stones, combine colors within a soft palette and appeal especially to professional women, says Chow. 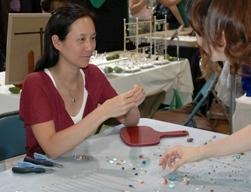 In 2003, Chow and Healy returned to New York City when he joined the faculty of Seton Hall Law School. Currently a partner at Hogan & Hartson LLP, she spends most Saturdays selling her jewelry, Arlene Chow Designs, at The Young Designer’s Market (at 268 Mulberry) in NoLiTa. Her work recently caught the attention of a costume designer and appears in two independent films, Bella (2006) and Brother’s Shadow (2006).
She identifies the self-assurance, people skills and composure she’s developed as an attorney as a source of her success in the jewelry business.
“Being a lawyer gives you the chutzpah to put yourself out there. I didn’t have the same confidence before I went to law school.”