Video of the conference is also available here.

These alumni luminaries, including current and former high-ranking government officials, gathered on April 13 and 14 for a thought-provoking conference honoring Gardner as he prepares to retire from teaching in July. The conference, titled “The Challenges We Face,” featured panels on a range of pressing issues for the international community, including global trade and finance, human rights, and challenges to the transatlantic alliance. The invitation-only event also featured lunchtime addresses by Zbigniew Brzezinski, the National Security Adviser to President Jimmy Carter, and Paul A. Volcker, the former chairman of the Federal Reserve. 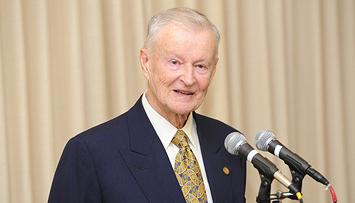 Over the course of six decades, Gardner’s writings “anticipated both the challenges of the emerging post-colonial and post-imperial world and the need for an enlightened response,” said Brzezinski, who served with Gardner in the Carter administration. His accomplishments as policymaker and diplomat include advocating a special lending window for the World Bank, as well as handling the sensitive post of ambassador to Italy during a difficult phase of the Cold War, Brzezinski added.

Volcker, whose friendship with Gardner was cemented during their involvement with the Council on Foreign Relations and the Trilateral Commission, praised the clarity of Gardner’s writing, analysis, and oration. Most impressive, however, is Gardner’s pride in his seminars and his commitment to his students, Volcker said. 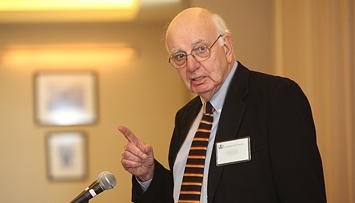 “Year after year, he told me with great confidence that each successive Gardner seminar has attracted ever more capable students with evermore brilliant prospects,” Volcker told the audience. “That should be a source of confidence about the future of the world.” 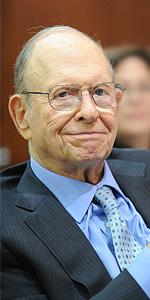 Gardner (pictured left), who joined the Columbia Law School faculty in 1957, took leave from the Law School while serving in Italy and again after President Bill Clinton appointed him U.S. Ambassador to Spain. He majored in economics at Harvard, earned his law degree from Yale, and then studied at Oxford as a Rhodes Scholar before embarking on a career in which he moved between academia, military service, diplomacy, and journalism. His journalistic résumé included a profile of Eleanor Roosevelt he penned for The New York Times Magazine.

Gardner began teaching his influential U.S. economic foreign policy seminar in the 1950s, helping shape generations of students. The breadth of his legacy was evident in the panel discussions, where Gardner’s former students represented seemingly every corner of law, business, government, and the nonprofit world, including Reynold Levy ’73, the president of Lincoln Center; Judge Xue Hanqin ’83 LL.M., ’95 J.S.D., a member of the International Court of Justice; Bradford L. Smith ’84, general counsel at Microsoft; and Susan D. Maples ’07, a Natural Resources Governance Fellow who works in the Office of the Legal Adviser to the President of Liberia.

John H. Coatsworth, the Provost of Columbia University and former dean of Columbia’s School of International and Public Affairs, noted in his introduction of the honoree at the conference that the scope of Gardner’s accomplishments would seem to require exploiting some cosmic loophole.

“No one else I know has managed to be a scholar, lawyer, teacher, policymaker, economist, diplomat, institution builder, comedian, and raconteur—all without resorting to reincarnation,” Coatsworth said.