NEW YORK BAR NAMES NEW AWARD FOR ALUM KAY C. MURRAY
Honors her at Annual Meeting as Award’s First Recipient
Press contact:
James O’Neill 212-854-1584 Cell: 646-596-2935
[email protected]
January 29, 2008 (NEW YORK) – Columbia Law School alum Kay C. Murray ’76 received the New York State Bar Association’s inaugural Kay Crawford Murray Award on Tuesday, Jan. 29 during the NYSBA’s annual meeting in New York City.
The award, which will be presented annually by the NYSBA’s Committee on Women in the Law, celebrates an individual who, in the spirit of Murray, recognizes the value of diversity in the legal profession and has committed to advancing the professional development of women attorneys.
The award was presented during a luncheon for the Committee on Women in the Law at the Marriott Marquis in Manhattan. 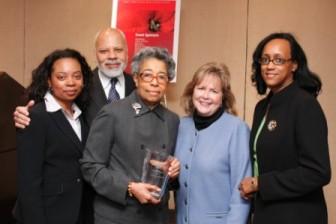 Kay Murray '76 (third from left) received an award from the NYSBA's Committee on Women in the Law Jan. 29.  Left to right are Taa Grays, Chair of the NYSBA Committee on Women in the Law; Past NYSBA President Kenneth G. Standard; Kay Crawford Murray, recipient of the Inaugural Kay C. Murray Award; NYSBA President Kathryn Grant Madigan; and Tracey Salmon-Smith, Program Coordinator and member of the Committee on Women in the Law. (Photo credit: Jacques Cornell for NYSBA)
Murray, who chaired the committee in the 1980s, is a ``trailblazing attorney of color who has focused significant efforts toward highlighting and helping assuage gender bias issues in the legal profession,’’ wrote Jon Sullivan, the NYSBA’s manager of media services in the January/February edition of the State Bar News.
Murray is past president of the Columbia Law School Alumni Association and in 1997 received the Lawrence A. Wien Prize for Social Responsibility from the Law School. The Wien Prize honors individual attorneys who, like Lawrence Wien, a Columbia Law School graduate of 1927, put their resources and legal skills to work for the public good. The recipients serve as positive role models for both the profession and for law students.
``Kay C. Murray has been an inspiration and mentor to many women, particularly young African-American women, because she took on the tough issues that were important to women, minorities and families at a time when few women of color even considered a career in the law,’’ said Taa Grays, chair of the NYSBA’s Committee on Women in the Law.
During the time Murray chaired the committee, she raised awareness of women’s issues, spearheading a report that urged the Association to propose a model policy for childbirth and parenting leave as a guideline for law firms.
Murray began her legal career as an associate at Shearman & Sterling. In 2002 she retired from the New York City Department of Juvenile Justice, where she had served as general counsel since the agency was created in 1979. She received a Lifetime Achievement Award from the agency.
She is a former vice-president of the New York City Bar Association, and has served on several committees of the American Bar Association and the State Bar Association.
Murray earned her bachelor's degree from Bennington College in Vermont. In addition to her law degree, Murray received a master’s degree from Teachers College at Columbia University. While at Columbia Law School, she was a Harlan Fiske Stone Scholar.