Carter appeared on CBS This Morning in a segment on how families and friends can avoid divisive discussions of politics this Thanksgiving. 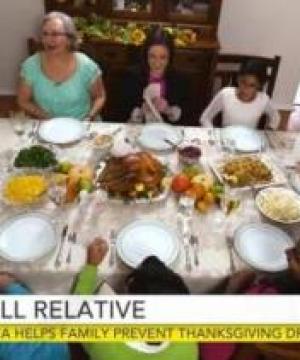 Columbia Law School Professor Alexandra Carter ’03 has helped resolve countless disputes during her career as a lawyer and an educator specializing in mediation, but she was surprised to be asked to mediate a potential family conflict on national TV.

Just one week after teaching U.N. diplomats to use mediation skills in their negotiations, Carter appeared on CBS This Morning in a segment on how families and friends can avoid divisive discussions of politics this Thanksgiving.

Carter directs the Law School’s Mediation Clinic, and demand for her expertise has increased as a result of the polarizing 2016 presidential election. CBS This Morning invited Carter to join correspondent Mo Rocca at a Thanksgiving dinner rehearsal, at which she mediated a family discussion on politics. Carter recommends that families make a game plan ahead of time, establish groundrules, and try to find common ground.

Carter routinely tackles a wide range of issues, and takes a creative approach to addressing conflicts. In addition to the mediation trainings she conducts through a partnership with the United Nations's training arm, UNITAR, Carter recently took a class inside a locker room at Columbia University’s Dodge Fitness Center to examine the meaning of “locker room talk.” She also brought her students to serve as discussion facilitators at a post-election community gathering presided over by New York City Councilman Mark Levine, and conducted pre-election voter protection work on behalf of the Rosebud Sioux Tribe in South Dakota.

The Law School's Mediation Clinic, founded in 1992 by Professor Carol Liebman, trains students in problem-solving and conflict-resolution skills, and represents diverse clients in and around New York City. Each year under Carter’s leadership, the clinic works with hundreds of parties in settings ranging from the small claims court in Harlem to employment discrimination claims in federal court.

Before joining the Law School in 2008, Carter was an associate attorney and mediator at Cravath, Swaine & Moore, where she worked on a variety of cases that included a multibillion-dollar securities class-action lawsuit and several multibillion-dollar mergers, as well as disputes involving copyright law.

As a law student at Columbia, Carter won the Jane Marks Murphy Prize for clinical advocacy, and trained under Liebman.