Albert Rosenthal Remembered as Long on Grace, Devoid of Pretense

Media Contact:
Public Affairs Office, 212-854-2650 [email protected]
New York, March 18, 2010—Albert J. Rosenthal had little time to dwell on the prestige that comes with being dean of Columbia Law School.
As colleagues recall, the Al Rosenthal they knew, who died Wednesday at age 91, was full of passion for his work but utterly lacking in pretense while serving as the Law School’s leader from 1979-84.
That even extended to getting theater tickets for a visiting dignitary, as Vincent Blasi, the Corliss Lamont Professor of Civil Liberties recalled.
“Rather than call up an alum with the proper connections or send a minion, Al went down to the TKTS booth in Times Square and waited in line to get the tickets,” Blasi said. 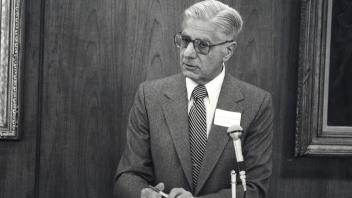 Blasi also experienced another side of Rosenthal when he and Henry Monaghan, the Harlan Fiske Stone Professor of Law, were visiting professors before they were hired in 1983.
“He wanted to tell us that we were not in competition for a permanent offer, that the Law School had the resources and the will to hire two mid-career constitutional law professors that year,” Blasi said. “That simple, thoughtful gesture meant a lot to both of us.”
They were the kind of gestures that made Rosenthal (seen here in 1984) a favorite with colleagues, as well as students in his constitutional law classes.
"Al was the classic law professor -- serious about his field, exhaustive in his knowledge of the law, kind to students, and devoted to the school,” said Lee C. Bollinger ’70, President, Columbia University; Professor of Law, who attended the Law School while Rosenthal served as a professor.
“He was one of the most likable people you could imagine," Bollinger added.
Rosenthal was sought out for the deanship, a job he did not covet. In fact, he initially rejected the post, but ultimately decided to take on the formidable task of identifying and recruiting the Law School’s next generation of leading scholars following a wave of retirements.
Because he had not campaigned for the job, Rosenthal’s appointment was viewed as a “mediating influence, a modest, kind and gentle scholar who would be welcome as a leader,” said Peter L. Strauss, Betts Professor of Law.
“I cannot recall a bitter word during or about his deanship, and following it he was a constant source of wise counsel, fully engaged without ever abandoning the modest demeanor that was his constant presence in the world,” Strauss said.
Columbia Law School, founded in 1858, stands at the forefront of legal education and of the law in a global society. Columbia Law School joins its traditional strengths in international and comparative law, constitutional law, administrative law, business law and human rights law with pioneering work in the areas of intellectual property, digital technology, sexuality and gender, criminal, national security, and environmental law.
Visit us at http://www.law.columbia.edu
Follow us on Twitter http://www.twitter.com/columbialaw