After the Arab Spring Revolutions, Absence of Rule of Law Key Challenge

New York, Sept. 11, 2012—Following the successful Libyan revolution and the overthrow of Moammar Gadhafi, a major problem facing the country is “an absence of the rule of law,” the chief justice of Libya’s Supreme Court told a large group of Columbia Law School students and other guests Thursday at an event held at Jerome Greene Hall.
After 42 years under the dictatorial rule of Gadhafi, Libya is transitioning to democracy. Chief Justice Kamal Bashir Dhan (pictured far left) pointed out that his country’s 200-seat interim parliament was elected just this past July and that the country is still operating without a constitution.
“Many people in Libya believe that the absence of law can lead to chaos,” he said in Arabic through an interpreter. But, despite the proliferation of weapons, he added, Libya has experienced less violence than expected.
Dhan was joined in the panel discussion by Said Mechichi, the State Secretary for Reform, Ministry of the Interior of Tunisia—the country that in 2010 sparked the revolutions known as the Arab Spring. Mechichi addressed Tunisia’s progress since former President Zine El-Abidine Ben Ali fled the country in 2011.
Katharina Pistor, the Michael I. Sovern Professor of Law and director of the Center on Global Legal Transformation at the Law School, welcomed the speakers and offered brief introductory remarks to kick off the panel, “The Arab Spring: Rule of Law in Transitional Settings, Libya, Tunisia and Beyond.”
Both Mechichi and Dhan noted significant differences between the revolutions in their countries. Tunisia’s overthrow of Ali was relatively peaceful compared to the efforts in Libya, which became a full-scale armed conflict.
“What’s most important,” Mechichi said,” “is that both regimes have fallen.”
The greatest achievement since the departure of Ali, he stressed, was the election of members of an interim parliament. Like Libya, Tunisia faces the outstanding imperative of drafting a constitution.  Mechichi added that his country is implementing reforms in its security sector, judiciary and treatment of the media. 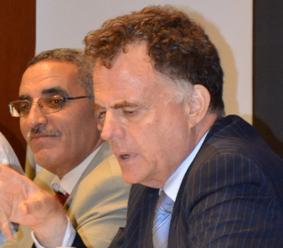 Addressing the daunting tasks ahead, he emphasized, “there can be no security without development and there can be no development without security.
During a robust Q&A session following the speakers’ presentations, one audience member took issue with the pace of progress, asking how Tunisia could expect to establish the rule of law when it has yet to reform much of its legal code. Mechichi agreed there had been a delay in bringing about legal reform but insisted those reforms would be undertaken.
Pictured left to right: State Secretary for Reform, Ministry of Interior, Tunisia –H.E. Mr. Said Mechichi; Jordan Ryan, United Nations Director of the Bureau for Crisis Prevention and Recovery.
“All the laws we enact must be in line with the constitution,” Mechichi said. “How can we enact significant laws when we haven’t drafted the constitution?”
Answering a similar question about Libya’s efforts, Dhan pointed out that the French Revolution took several years.
Pistor raised with both speakers the challenges they face in rebuilding their nations with many of the same people who were involved in the decades-long dictatorships.

One action Libya took was to separate the judiciary from the executive branch, which Dhan called “a step in the right direction.”

“We need to establish a state where Libyan citizens will be assured of getting the justice they deserve,” he said.
After the event, Pistor said she was pleased by the visit, noting that Dhan and Mechichi made a “fair effort” to address the difficult questions posed.
“We’re talking about a transition that is in its earliest stages,” she said. “It’s not that you just shift from one regime to another. You have to reconstruct institutions with the very same people, and that’s hard. The rule of law is always an aspiration. You never completely achieve it. Seeing people who are committed to this ideal is important.”
The discussion was part of the Milbank, Tweed, Hadley & McCloy Faculty-Student Intellectual Life Series and was sponsored jointly by: Columbia Law School Center on Global Legal Transformation; Columbia Law School Office of International Programs; Columbia University Alliance Program; the Office of the United Nations Development Program; and The Middle East Institute of Columbia University.