Advancing Human Rights Around the World 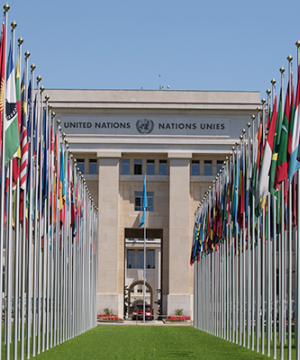 “Anniversaries present an opportunity for reflection,” said international human rights law expert Sarah H. Cleveland, Columbia Law School’s Louis Henkin Professor of Human and Constitutional Rights, during a Columbia University Lecture on human rights connectivity and the future of the human rights system, delivered last year. “Reflection backwards on where we have been, and why; reflections on the present and where we are; and a look to the future.”

Dec. 10 marks one such anniversary: the day in 1948 when the newly formed United Nations General Assembly adopted the Universal Declaration of Human Rights, setting a standard for the defense and protection of human rights across the globe. Now designated “Human Rights Day,” the world celebrates the anniversary of this declaration, but also, as Cleveland said, reflects on what more can be done.

Since the days of HRI’s founding by the late Louis Henkin—often credited with establishing human rights law in its modern form—Columbia Law School has been at the forefront of human rights scholarship and fieldwork. Cleveland and her HRI Co-Director Sarah Knuckey, the Lieff Cabraser Associate Clinical Professor of Law and director of the Human Rights Clinic, now spearhead the school’s efforts in these areas, backed by a team of leading advocates, educators, and scholars. A sample of recent Law School projects include:

In closing her University Lecture, Cleveland invoked Robert F. Kennedy’s famous Day of Affirmation speech delivered at the University of Cape Town, South Africa, in 1966. “It is the challenge of our age, the age of connectivity, to harness and channel the tiny ripples of hope that emanate from our disparate human rights institutions to help build those ripples into a current capable of confronting the walls of oppression and resistance that daily challenge our world,” she said.