Alum Acosta and Columbia Law School Honored at Hispanic Judges Event
Press contact:
James O’Neill 212-854-1584 Cell: 646-596-2935
[email protected]
January 31, 2008 (NEW YORK) - The Hon. Rolando T. Acosta ’82 was among those honored this month at the Hispanic Heritage Awards Dinner, an annual event of the Association of Judges of Hispanic Heritage (AJHH) that rotates location from year to year and was held this year in the Faculty House at Columbia University. 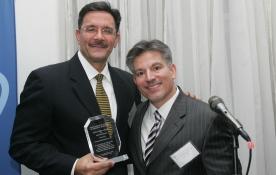 Acosta, elected a New York State Supreme Court Justice in New York County in 2002, was recently appointed by Gov. Eliot Spitzer to the Appellate Division, First Department. Acosta, past president of the AJHH, received the group’s John Carro Award for judicial excellence at the dinner, held Jan. 23.
“Judge Acosta has been one of the most active judges consistently advocating more diversity in the courts,’’ the Hon. Joseph Capella, president of the AJHH and Judge of the Housing Court, said in an interview. “It’s an important issue because you want the bench to reflect the community at large. Diversity on the bench makes people feel better about the court system.’’ 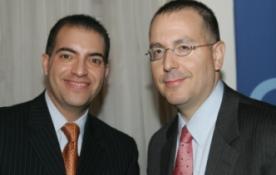 Hon. Joseph Capella, President, Association of Judges of Hispanic Heritage, Inc., with Dean David M. Schizer (right)
During the evening, Carol Robles-Roman, Deputy Mayor for Legal Affairs and Counsel to Mayor Bloomberg, and Columbia Law School each were honored with the Frank Torres Award, presented to individuals or organizations that exhibit a commitment to diversity.
Acosta said the number of judges on the bench in New York has declined even as the Hispanic population is rising, and he has pressed the issue with political leaders. “I’ve tried to let them know the importance of having a judiciary that’s representative,’’ he said in an interview. He noted that Gov. Spitzer has appointed more women and people of color to the bench in one year than had been appointed in the prior 12 years combined.
“One of the crucial problems today is a crisis of confidence in the legal profession,’’ Acosta said, “and as long as people of color see themselves on the outside looking in they won’t feel confident in the system.’’
Acosta, who grew up in the Dominican Republic, moved to New York with his family when he was 14. He lived in Washington Heights and the Bronx, where he attended De Witt Clinton High School. He graduated in 1979 from Columbia College, where he was a starting pitcher for the Lions and received every athletic prize awarded to a pitcher by the Ivy League and Intercollegiate Baseball League.
He said his desire to help others and his observation that lawyers played a key role in nearly every aspect of society drew him to law school.
At the university’s commencement in 2000, he was conferred Columbia University’s Medal For Excellence.
He said Columbia and its student body looks very different than it did when he was enrolled. “The student body is much more diverse now, and that’s wonderful to see,’’ he said.
When accepting the Frank Torres Award on behalf of Columbia Law School, Dean David Schizer said that much has changed in the 150 years since the Law School was founded. Today, 48 percent of the first-year class are women, and 33 percent are people of color.
“This represents a wonderful transformation,’’ he said. “We are so proud to look out on this audience and see so many of our graduates in leadership positions. We’re proud that our law school had a small part in your success and we hope that we produce more leaders like all of you.’’ 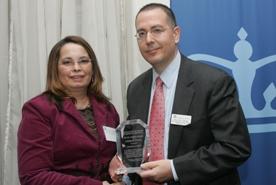