The article, which was published in the April 1, 2015 edition of the Yale Law Journal (124 Yale Law Journal 1836), contributes to the discussion of presidential control and oversight of the modern administrative state—a timely topic. 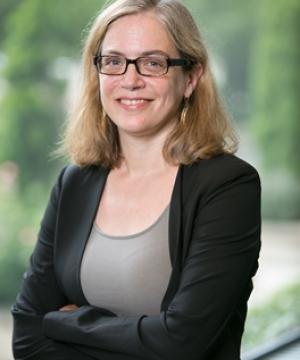 Metzger is a highly regarded constitutional law scholar who in 2012 helped launch the Law School’s Center for Constitutional Governance, which brings together a dynamic roster of constitutional scholars engaged in the study of governmental structure and relationships. Her work has appeared in the Columbia Law Review, the Harvard Law Review, and the Duke Law Journal, and she frequently files amicus briefs in major constitutional and administrative law challenges before the Supreme Court and other courts, including Whole Women’s Health v. Hellerstedt in the October 2015 term.

In addition, Metzger is an award-winning teacher, having been selected by the graduating Class of 2014 as recipient of the Willis L.M. Reese Prize for Excellence in Teaching.

Here is the summary of the winning article from the SSRN abstract:

The IRS targets Tea Party organizations’ applications for nonprofit tax-exempt status for special scrutiny. Newly opened online federal health exchanges fail to function. Officials at some Veterans Administration hospitals engage in widespread falsification of wait times. A key theme linking these examples is that they all involve managerial and supervisory failure. This should come as no surprise. Supervision and other systemic features of government administration have long been fundamental in shaping how an agency operates, and their importance is only more acute today. New approaches to program implementation and regulation mean that a broader array of actors is wielding broader discretionary governmental authority. The centrality of systemic administration in practice contrasts starkly with its virtual exclusion from contemporary U.S. constitutional law. This exclusion of administration takes a variety of doctrinal guises, but it surfaces repeatedly in both structural and individual rights contexts.

This Article argues that the exclusion of systemic administration from constitutional law is a mistake. This exclusion creates a deeply troubling disconnect between the realities of government and the constitutional requirements imposed on exercises of governmental power. Just as importantly, the current doctrinal exclusion of administration stands at odds with the Constitution’s text and structure, which repeatedly emphasize one particular systemic administrative feature: supervision. This emphasis on supervision is most prominently manifest in Article II’s Take Care Clause, but it also surfaces more broadly as a constitutional prerequisite of delegation of governmental power. Whether it is rooted in Article II, general separation of powers principles, or due process, a duty to supervise represents a basic precept of our federal constitutional structure.