The 2012 Presidential Election: Setting the Stage for a New "Hanging Chad"?

New York, Aug. 3, 2012—With the November elections fast approaching, Professor Nathaniel Persily of Columbia Law School has identified a set of key issues that are changing the election process and could potentially affect outcomes. The growing use of absentee ballots threatens to strain local election authorities that are already struggling to comply with complex election laws, and more stringent voter identification laws could suppress voter turnout, says Persily, one of the nation’s leading authorities on election law. Finally, he says, the laws governing campaigns need to be updated to reflect the impact of new media.

Persily, the Charles Keller Beekman Professor of Law and Professor of Political Science, and director of the Center for Law and Politics, began his career as a law professor shortly after the 2000 election meltdown that led to the Supreme Court’s landmark decision in Bush v. Gore. In the upcoming presidential election, he predicts that a steep increase in the use of absentee ballots could make them “the next potential chad to dangle,” as he wrote last month in an op-ed for the New York Daily News. 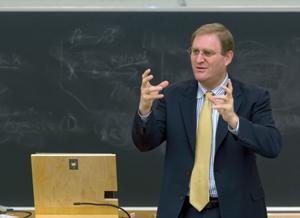 “States like absentee ballots because they ease the burden on polling places and are seen as cheaper to administer,” Persily said. “Voters like the convenience of not having to wait in line.” Indeed, in recent years absentee and mail-in ballots have been rising as a share of total ballots cast. The majority of states now allow “no-excuse absentee” voting, meaning you no longer need “the political equivalent of a doctor’s note.”

The rise in absentee ballots is “seen as a win-win,” says Persily, who holds a Ph.D. in political science, but it’s not necessarily so: Absentee ballots can be more problematic than they appear. This was the case in Minnesota in 2008, when nearly 1,000 absentee ballots were wrongly rejected in the razor-thin Senate victory by Al Franken over Norm Coleman. Absentee ballots also created problems in the 2000 Florida recount and during an earlier mayoral race in Miami.

While many debate whether new voter identification laws in some states will curtail election fraud at polling places, Persily posits that “the error rates are much higher and potential for fraud is greater” with absentee ballots, particularly since they are becoming a permanent fixture of our system. By the 2016 presidential election, he predicts, half of Americans will be voting early or by submitting absentee ballots.

Persily has written scores of articles on subjects ranging from redistricting to voting rights to campaign finance reform. Six of his papers have been cited by U.S. Supreme Court justices in their opinions.

Voter Identification Laws: “Killing a Fly with a Bazooka”

In an article written together with Harvard political scientist Stephen Ansolabehere, Persily opposed voter identification laws. While some believe that the laws serve to bolster the public’s faith in fair elections, Persily and Ansoloabehere argued that photo ID requirements bear “little correlation to the public’s beliefs about the incidence of fraud.” They said that the “possible relation of such beliefs to participation appears even more tenuous.”

“There is fraud and there is some voter impersonation fraud, but you’re trying to kill a fly with a bazooka with these kinds of laws,” Persily said in a recent interview with ABC News.

Last week, during an appearance on National Public Radio’s Tell Me More to discuss the implications of Pennsylvania’s voter ID law, Persily argued that the law could prevent thousands of people from having their votes counted because they do not have the required documentation.

“It is not rocket science or brain surgery to [get an ID], but the question is how burdensome it should be to vote,” he told NPR. “These are not literacy tests and they are not explicit poll taxes in the way that they were, say, 50 years ago in the South, but it is one more hindrance that would prevent some people from turning out to vote.”

In the end, however, Persily argues that the focus on more stringent voter ID laws and increased absentee ballots are distractions: The more pressing problem concerns election administration. “We pay a lot of attention to voter ID and absentee ballot laws, as well as some of the early voting issues,” he says. “But we still entrust management of our polling places to relatively untrained volunteers. The cash-strapped counties in charge of running elections cannot do what’s necessary to comply with all the byzantine laws that constrain them.”

Persily is in favor of national rules, greater standardization, and a public database for voting results by precinct. “I’d like to see some kind of national election authority that works,” he said. “The Federal Elections Commission, given its frequently deadlocked votes, is designed to fail and should be replaced.”

But if elections are inherently chaotic, making regulation around them particularly tricky, then the Internet and new media will only deepen that chaos. “Our fanaticism about regulating super PACs and corporations and shadow voting doesn’t get at the fact that the paradigm of campaigning is going to change as things go to the Internet,” Persily says.

In the wake of Citizens United v. Federal Election Commission, which allowed unlimited corporate and union spending in candidate elections, Persily said the real challenge is figuring out how to adapt campaign finance laws to the new technologies of communication. “Because that technology is conducive to anonymous spending, you could have people across the world putting ads on the Internet for or against a certain candidate,” he says. “The Internet has become the Wild West of campaigning, and our laws are way too outdated to address it.”