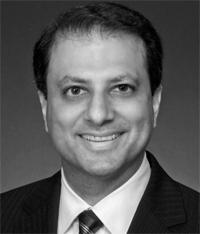 As the U.S. Attorney for the Southern District of New York, Preet Bharara ’93 leads an office widely regarded as one of the most important and prestigious federal prosecutor’s posts outside Washington, D.C. President Barack Obama nominated Bharara for the position, and the U.S. Senate unanimously confirmed him in August 2009.

A naturalized U.S. citizen, Bharara was born in Ferozepur, India, and was a young child when his parents immigrated to the United States. He grew up in Monmouth County, N.J. and earned his B.A. from Harvard College in 1990 and a J.D. from Columbia Law School in 1993. Bharara began his legal career in private practice, working first as a litigation associate with Gibson, Dunn & Crutcher from 1993 to 1996, and then with Swidler Berlin Shereff Friedman from 1996 to 2000.

In 2000, Bharara entered public service, accepting an offer from then U.S. Attorney Mary Jo White ’74 to serve as a federal prosecutor for the Southern District of New York. As an assistant U.S. Attorney, Bharara prosecuted organized crime and narcotics cases, among others, but he emerged more prominently in Washington when, in 2005, he became Senator Charles Schumer’s chief counsel on the U.S. Senate Judiciary Committee.

From 2005 to 2009, Bharara served as staff director of the U.S. Senate’s Subcommittee on Administrative Oversight and the Courts. During his tenure, he helped lead the Senate Judiciary Committee investigation into the Bush administration’s dismissal of eight U.S.Attorneys, which led to the resignation of U.S. Attorney General Alberto R. Gonzales. Bharara drew praise from both parties for his even-handed, nonpartisan management of the investigation.

Today, as U.S. Attorney for the Southern District of New York, Bharara oversees more than 200 lawyers who handle many of the nation’s—and the world’s—most high-profile cases involving organized crime, financial fraud, and public corruption. Bharara and his team have sent a clear message that they will vigorously pursue, and hold to account, those who violate the public trust.They have exposed corrupt local officials, as well as private sector frauds against the City of New York, and have been more aggressive and active on corruption in Albany than any other prosecutor’s office in New York. In 2010, under Bharara’s leadership, the Southern District merged its terrorism and international narcotics units to further strengthen its mission to investigate and prosecute transnational acts of terrorism, narcotics trafficking, and money laundering that threaten U.S. national security.

In his relatively short tenure, Bharara and the Southern District have secured scores of convictions. They have made headlines with the prosecution of Raj Rajaratnam (in one of the largest insider-trading cases in a generation) and made history in the largest criminal sweep of gangs in Newburgh, New York. From prosecuting international drug kingpins and infamous arms dealers, to securing life sentences for Faisal Shahzad, the Times Square Bomber and Ahmed Ghailani, a mass murderer of innocents in Africa, Bharara and his team are pursuing crime and criminality wherever they find it.

News about the 2011 Lawrence A. Wien Prize for Social Responsibility can be found here.